Smith registered his maiden half-century since his return to Australia and accompanied Coulter-Nile in an inspiring partnership of 102 off 89.

NOTTINGHAM: West Indies were on the charge again and it required a special innings from Steve Smith, along with a career-best performance with the bat from Nathan Coulter-Nile to help Australia overcome a period of early dominance and post a challenging 288.

The former Australia captain registered his maiden half-century since his return to the national side to bring out a patience knock and accompanied Coulter-Nile in an inspiring partnership of 102 off 89. West Indies bowled an alarming 24 wides, most of them being bouncers above shoulder length. Coulter-Nile led a remarkable revival for Australia before falling in the 49th over. In fact, his 92 is now the highest score by a No. 8 at the World Cup.

Once Jason Holder won the toss and decided to bowl, memories of old of the Caribbean returned at Trent Bridge with the scary, intimidating, fire-breathing West Indies pacers and their hostile spell of bowling flooring Australia to 38 for 4. But the start was squandered, with Smith finding suitable partners in first Alex Carey and later Coulter-Nile. By the time the innings finished, West Indies looked battered and Australia had posted a score they wouldn’t have fancied at 79 for 5.

There wasn’t much of a change in West Indies’ tactics from the one employed against Pakistan. Overcoming the disappointment of an erratic first over in which he conceded five wides and bowled a no-ball, Oshane Thomas made the most of the swinging conditions and squared up Aaron Finch. His new-ball partner Sheldon Cottrell tempted David Warner to play a false drive, which the batsman ended up slicing to point.

Thomas and Cottrell dealt Australia serious chin music. Usman Khawaja looked the most awkward of the lot. Having punched the third ball down the ground to open his account with a boundary, Thomas pinned Khawaja on the helmet which required some attention from the Australian physio. He received another snorter shortly after, this time from Andre Russell, and the next ball, Australia’s No. 3 played away from the body for Shai Hope to take a fine catch diving to his right.

Smith walked out to a smattering of boos but looked the most organised. But while he batted with calm and caution, the destruction continued at the other end. Cottrell brought out his gif-worthy celebration for the second time when he sent back Glenn Maxwell for a duck, pulling awkwardly at a rising delivery for Hope’s third catch. His first two wickets had come at the expense of just 11 runs from four overs.

Despite the wickets, Australia managed to score at over five an over, with the occasional boundary and some wonderful running between wickets. Whenever the West Indies got wickets, they had Australia fending, but otherwise the runs flowed. Carlos Brathwaite was introduced before Jason Holder and Australia tried to seize advantage with Marcus Stoinis taking him for two early boundaries.

Stoinis grew further in confidence with a couple of imperious straight drives off Holder, and Australia began to sustain momentum. The promising little 41-run partnership was beginning to flourish before Stoinis pulled Holder to Pooran at short midwicket, culminating into a wicket-maiden over.

Australia went boundary-less for six overs with Smith and Carey digging in. Carey struck five boundaries in a span of nine deliveries and from 3 off 25, in no time, raced to 31 off 42. Russell snapped the stand, with Carey giving Hope his fourth catch. But Smith, who had almost batted in stealth mode until then and helped himself to a couple of boundaries, ensured Australia kept ticking. He almost had himself out caught in the deep but Cottrell made of mess of it. Smith had to play the waiting game, taking 77 balls to get to a half-century, dealt not so graciously by the crowd.

Coulter-Nile had a dodgy start, fending and getting himself into a tangle at first but gained control to crack three sweetly-timed boundaries off nine balls. He then struck a disdainful six off Russell over deep square leg. There couldn’t have been any better way for Coulter-Nile to justify his selection as Australia’s No. 8 than proving how handy an asset he can be with the bat. Plonking Brathwaite over long on, Coulter-Nile brought up his maiden half-century.

Shimron Hetmyer dropped Coulter-Nile in the deep, but the West Indies lifted themselves in the field through Cottrell, who plucked out a one-handed stunner running in from fine-leg to remove Smith. Cummins was the next to go but Coulter-Nile kept Australia going. Cottrell was drilled for consecutive sixes and Brathwaite swatted for two boundaries. Tantalizingly close to a century, Coulter Nile holed out in the deep to Brathwaite before Mitchell Starc became the last wicket to go down. 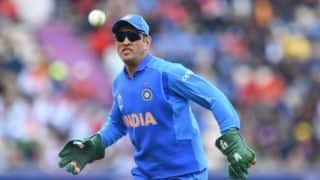 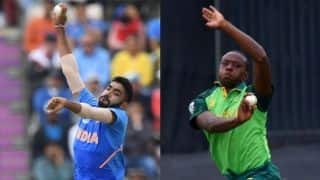