NOTTINGHAM: On a surface where the average first-innings score touches 300, Pakistan batsmen were bulldozed by West Indies pace battery to be rolled over for 105. Young quick Oshane Thomas finished with 4/21, backed splendidly by the fit and fiery Andre Russell, and Jason Holder, who overcame a horrible start of 20 from first two overs to finish with 3/23.

Holder, who played down the idea of high-scoring World Cup totals on the eve of the match, pointed out how a low total is also very much a possibility, a prediction that couldn’t have been more spot on. Pakistan’s highest partnership was between Fakhar Zaman and Babar Azam for the second wicket. Once they went, the wheels came off. Pakistan’s final seven wickets went down for 41 runs, with Wahab Riaz’ cameo rescuing Pakistan from the embarrassment of a double-digit total.

Not that the score they managed was any better. With the extended batting session Pakistan underwent on Thursday, the eventual response was a far cry from it. Fakhar and Imam Ul Haq started positively, cracking a couple of crisp boundaries before Imam was taken down leg by Shai Hope. Fakhar’s dismissal, off Russell, was where things really turned. The West Indies allrounder began with two length deliveries, and two bouncers in his first over, the first of which Fakhar played on, clearly beaten for pace.

From there, the West Indies quicks bullishly made their presence felt. Russell’s next strike arrived 11 balls later and he finished with 2 for 4 in three overs, which included a maiden. Babar, especially the way he started with a boundary off the first ball, gave Pakistan hope, but despite getting a lifeline in 12, could only add 10 more before Thomas removed him. Sarfraz began with a boundary towards fine-leg, before the same shot led to his dismissal as he feathered Holder to Hope with West Indies hitting the mark for a correct review.

From there, the Thomas-Holder show took over. From 62 for 3, Pakistan slumped to 83 for 9 as the legendary Waqar Younis watched in dismay from the press box. With Mohammad Hafeez batting, Pakistan’s lower needed to work around him, but a string of brain fades that unfolded, denied them the support. Imad Wasim caught an awkward bouncer on his glove for Chris Gayle to take the catch, his 120th in ODIs, making him the player with the maximum catches for West Indies.

Pakistan were in danger of not even lasting an entire T20 innings when Wahab clubbed a couple of sixes and a boundary, but it still wasn’t to prevent Pakistan from registering their second-lowest World Cup total. 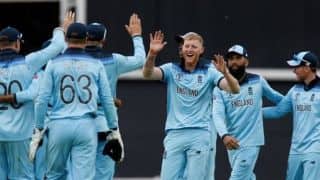 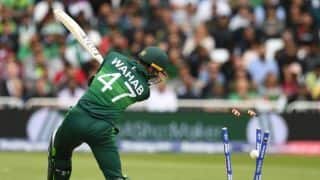