Steve Smith scored a hundred to power Australia to a strong 297/9 against England in their first ICC Cricket World Cup 2019 warm-up match in Southampton on Saturday.

Steve Smith scored a hundred to power Australia to a strong 297/9 against England in their first ICC Cricket World Cup 2019 warm-up match in Southampton on Saturday.

Smith, who was booed alongside David Warner, was unperturbed as he scored 116 off 102 with eight fours and three sixes. Warner recorded the next best score for the defending champions, hitting 43 off 55 with five fours.

England opted to field and Mark Wood got rid of captain Aaron Finch cheaply in the fifth over. The Aussies struggled early on before settling in thanks to a 64-run partnership between Warner and Shaun Marsh for the second wicket. Warner became Liam Plunkett‘s first victim of the match and he also accounted for Marsh who got the start, scoring 30 off 44.

From thereon, Australia took control courtesy former captain Smith and Usman Khawaja as the duo added 78 runs between them. With the death-overs approaching, Khawaja attempted to up the ante, giving spinner Liam Dawson the charge only to be stumped on 31.

A terrible mix-up saw Marcus Stoinis being run out cheaply hurting Australia’s chances of a big total. However, Smith batted solidly, shifting gears and found an able ally in Alex Carey whose cameo was crucial in a strong finish. With four fours, he struck a 14-ball 31 before being brilliantly caught by a diving Tom Curran. Meanwhile, Smith struck a six and a single to reach three figures and was out in the final over.

Plunkett was the pick of English bowlers, finishing with 4/69.

For England, there were two injury scares with Wood pulling out after the first delivery of his fourth over due to a hamstring injury and Jofra Archer hurt himself while fielding. That led to 42-year-old Paul Collingwood taking the field as a substitute fielder. 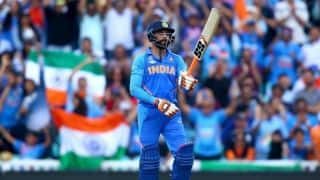 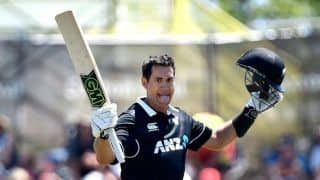