Glenn Maxwell made 48 and Bhuvneshwar Kumar was India's best bowler with 4/45.

Shaun Marsh produced an excellent hundred to carry Australia towards 300, but a collapse of four wickets for three runs, triggered by Bhuvneshwar Kumar in a terrific display of late-overs bowling, has set India a target of 299 to level the series at Adelaide Oval. Only twice have India ever successfully chased a higher total in ODIs in Australia.

Bhuvneshwar and Mohammed Shami removed Australia s openers inside eight overs, after which Marsh forged half-century stands with Usman Khawaja, Peter Handscomb, Marcus Stoinis and Glenn Maxwell for the second, third, fourth and fifth wickets while shoring up one end of the innings quite brilliantly on a very hot day in Adelaide. (LIVE UPDATES: INDIA vs AUSTRALIA, 2nd ODI)

The next best after Marsh s 131 was Maxwell s 48, indicative of the nature of the Australian innings and just how Marsh’s hundred could yet prove match-winning. The damage was reduced by Bhuvneshwar who dismissed Marsh and Maxwell in the 48th over while claiming 3/15 in his last two overs, a fine way to end a day that began with a high-class opening spell.

Aaron Finch s slump was extended when he was bowled Bhuvneshwar in near identical manner as during the first ODI, the difference being that this time he was beaten when attempting a big drive. Finch made six off 19 balls, lowering his ODI batting average since November to 13.8. Four deliveries later, his opening partner Alex Carey was undone by a sharp bouncer from Shami that he miscued for Shikhar Dhawan to accept an easy catch at midwicket. Australia were 26/2 in 7.4 overs.

The ODI debutant Mohammed Siraj replaced Shami (4-0-17-1) and began by feeding the left-handed pair of Khawaja and Marsh on the pads, with his second all clipped by the former for four and the sixth nudged past mid-on by Marsh for three. Siraj conceded 34 in four overs, his final going for 13 with each batsman swatting a boundary. (FULL SCORECARD: INDIA vs AUSTRALIA, 2nd ODI)

Bhuvneshwar (5-0-9-1) made way for Kuldeep Yadav, who looked on as MS Dhoni failed to hold onto a thick outside edge when Khawaja flashed outside off stump. The drop didn t cost India anything, for moments later Ravindra Jadeja hit the stumps with a terrific direct hit to get Khawaja for 21.

Marsh collected his half-century off 62 balls, the result of smart batting. He didn t commit to playing backwards or forwards, instead relying on quick reflexes to bunt fuller balls down the ground for singles or bring out the horizontal bat shots in a flash. When Siraj returned, Marsh swivelled to pull for between two fielders in the deep, in the process raising the 50-run stand with Handscomb.

Then came a moment of brilliance from Dhoni, who had Handscomb (20) stumped off Jadeja when the batsman mistimed a sweep and was left with his legs splayed. Stoinis found himself in earlier than perhaps expected and after a slow start, began to exert himself with some strong shots.

Marsh remained unhurried by the flow of wickets and batted in a controlled and determined manner, his cuts and flicks the highlight. Shami s third spell began with Stoinis clubbing successive boundaries, but cramped for room off the next delivery the allrounder, on 29, feathered an edge to Dhoni off a hurried pull shot. The stand with Marsh was worth 55 in 9.2 overs.

Marsh, 87 off 93 balls at this stage, raised his seventh ODI hundred off 107 deliveries. Eight overs remained, leaving India to try and control the damage. Maxwell flat-batted Kuldeep for six, then Marsh reciprocated with a dance down the track to send Kuldeep off with figures of 0/66 in his ten overs – his most expensive wicketless spell in 35 ODIs.

Maxwell was given lbw against Siraj, reviewed it successfully and proceeded to slice the bowler for his second four of the 44th over. Marsh ended the over by cracking Siraj through the covers for four more. Marsh continued the surge by swinging Shami for six over midwicket and Bhuvneshwar into the stands behind square leg. Rohit Sharma dropped a juggling catch at extra cover off a full-blooded smash from Maxwell, on 41, and Siraj ended his debut with 0/76 in 10 overs.

Bhuvneshwar extracted Maxwell and Marsh in his ninth over, ending a stand worth 94 in 65 balls and allowing just three runs. Shami removed Jhye Richardson and a fine running catch at deep cover gave Bhuvneshwar his fourth, before the innings ended with Nathan Lyon hitting a four and a six. 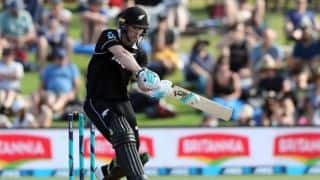