Usman Khawaja top-scored with 50 after Aaron Finch bagged a duck in his 100th ODI.

Mohammed Shami and Kuldeep Yadav led a controlling Indian bowling performance in the first ODI in Hyderabad on Saturday, taking two wickets each to keep Australia to 236/7 in 50 overs which owed plenty to a seventh-wicket partnership of 62 between Nathan Coulter-Nile and Alex Carey.

Aaron Finch‘s poor run continued with a duck in his 100th ODI, Usman Khawaja made an even 50 before throwing it away and Glenn Maxwell was cut off on 40 before he could do damage. The result was an innings of fits and starts that ended on 236. (LIVE UPDATES: INDIA vs AUSTRALIA, 1st ODI)

Finch began his 100th ODI by winning the toss and opting to bat, but his excitement was quickly quelled as he nicked his third ball faced from Jasprit Bumrah to MS Dhoni to leave Australia 0/1 in the second over. Khawaja and Marcus Stoinis were kept quiet through in the eight overs that Bumrah and Shami (4-2-6-0) bowled in tandem, but the introduction of Kuldeep and Vijay Shankar allowed them to score easily. Stoinis took four fours off Shankar’s gentle medium-pace, the pick of them a powerful drive past mid-off, and Khawaja stepped out to launch Kuldeep for six in his first over. (FULL SCORECARD: INDIA vs AUSTRALIA, 1st ODI)

The pair put on 87 until Kedar Jadhav’s side-on, slingy variety of spin produced the breakthrough. Stoinis, on 37, pulled his 53rd ball – a dirty half-tracker – straight to midwicket. Khawaja eased to his fifty in 74 balls and promptly fell when he skipped out to Kuldeep and lofted the ball out to cow corner where Shankar held a good sliding catch.

Fresh from a series-winning hundred in the last T20I, Maxwell displayed his swagger as he walked out to bat and made a busy start. On 6, he played a loose waft at Bumrah and edged between Dhoni and Rohit Sharma at a wide first slip but that was his only rash shot as he settled down to play a stirring innings.

With Peter Handscomb, Maxwell added 36 in 37 balls before Handscomb was duped by a lovely flighted delivery from Kuldeep that broke in and had him stranded well down the track to be stumped.

Maxwell’s deftness meshed with power saw him drive the spinners delectably into the covers and past the stumps, but the steady flow of wickets from one end kept India encouraged. The debutant Ashton Turner got to 21 off 23 balls before he inside-edged Shami onto his stumps, which was reward for the bowler who Turner swatted for a stunning six. Then came the wicket India really needed: Shami pitched one up, got it to shape in and Maxwell was bowled for 40.

Ravindra Jadeja hurried through his ten overs, which produced just 33 runs and after 40 overs Australia were 173/6. That was a massive job in checking the innings.

Carey (36* off 37) and Coulter-Nile (28 off 27) injected vital runs to the total through a series of inside and outside edges with a few meaty strikes thrown in. Each took a boundary off Shami’s penultimate over, missed a few heaves and stole singles with ease to drag Australia past 200. A misfield by Bumrah at short third man off a thick outside edge from Carey allowed four to raise the 50-run stand, and off the next ball Shami fumbled in his follow-through to allow a single.

Such moments stood out, for otherwise India were very good in the field. Carey picked up another fortuitous boundary when he edged Bumrah between Dhoni and slip, whipped the next ball off his hips for four more, 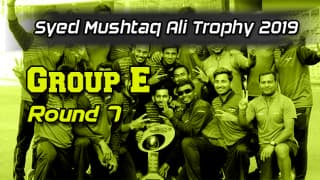