Pat Cummins claimed four wickets to help bowl out for 250 in 48.2 overs.

At the toss, Kohli said it was a “no-brainer” to bat first while predicting that the track at the VCA Stadium would deteriorate as the day progressed. In quick time, he found himself at the crease after Rohit Sharma bagged his first ODI duck in over a year and as wickets continued to fall in clusters, Kohli called on his reservoir of experience to craft a superb 116 that has taken him to within nine hundreds of matching Sachin Tendulkar’s once-mythical record of 49.

India failed to bat out their 50 overs, losing their last four wickets for 12 runs as Pat Cummins claimed 4/29 in a superb display.

Batting was definitely not easy on such a surface, and here is where Kohli once again marked out the difference in quality within this Indian team. The next best contribution was Vijay Shankar‘s breezy 46, an innings that matched Kohli’s for effervescence, while most others struggled against spin.

Rohit was out in the opening over, slashing Cummins straight to Adam Zampa at third man. Shikhar Dhawan’s problems against offpin continued when Glenn Maxwell trapped him lbw for 21 in the ninth over. Next to go was Ambati Rayudu, lbw for 18 to the returning Nathan Lyon. At this stage, Kohli was 31 off 35 balls.

With Shankar he put on 81 in what proved the highest stand of the innings and the most attractive period of batting. Shankar, standing tall and using the depth of his crease very well, worked the ball off his pads to manufacture singles and the occasional boundary. Kohli was happy to take a back seat to Shankar, and during this period he coolly stole singles and drove the spinners with precision.

Shankar drove down the ground well, with one flowing shot off Nathan Coulter-Nile particularly eye-catching. To Marcus Stoinis’ inviting medium pace, Shankar lofted four and six in one over to speed to 40 from 36 balls. However, against the run of play, it was a firmly struck shot from Kohli that Zampa deflected off his fingers to run out Shankar at the non-strikers’ end. He made 46 off 41 balls.

This dismissal cued a wobble, as Kedar Jadhav (11) chipped Zampa to extra cover and MS Dhoni flashed the next one to slip for a golden duck. Ravindra Jadeja (21 off 41 balls) overcame a nervous start to put on 67 with Kohli, who maintained a strike-rate above 90 despite the wickets and sluggish surface.

He should have been run out on 87 except that Maxwell missed the stumps. The 100 came off 107 balls with a rasping boundary through point.

Kohli was out for 116 off 120 balls in the 48th over when he swung Cummins straight to deep midwicket, who then bowled Kuldeep Yadav to claim his fourth wicket. The end came when Coulter-Nile bowled Jasprit Bumrah for zero. 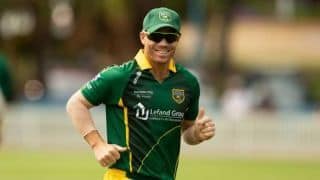