Despite Usman Khawaja s second ODI hundred that laid a solid foundation for Australia early on, India came back strongly to restrict the visitors to 272/9 in the fifth and the final ODI at the Feroz Shah Kotla, New Delhi on Wednesday.

Bhuvneshwar Kumar, was the pick of the Indian bowlers returning figures of 10-0-48-3. Ravindra Jadeja, coming in place Yuzvendra Chahal for the fifth ODI picked 2/45, including the wickets of Aaron Finch (27) and Glenn Maxwell (1).

After opting to bat first, Australia had a breezy start with Khawaja and Finch taking eight fours between them in the first six overs. Mohammed Shami, back in the side after being rested for the fourth ODI, was expensive in his first spell conceding 22 runs in his first three overs.

Khawaja continued his good form with the bat registering his fourth fifty plus score of the series. With skipper Finch, he put on 76 runs for the opening wicket and then with Peter Handscomb, scored at a quick pace adding 99 runs in 18.3 overs for the second wicket.

By the tenth over the openers had put on their third half-century stand of the series before Khawaja danced down the track to hoist Kuldeep Yadav for a six over long-on in his first over.

But, India got a much needed breakthrough with the bowling change of Jadeja in the form of Finch. Jadeja got the ball to straighten from a middle and leg stump line and the ball just about evaded the Australian skipper s forward defence to knock over the off stump.

Handscomb, last match s centurion, was up and running with two consecutive sweeps for fours off Kuldeep. Part-timer Kedar Jadhav was introduced as late as the 20th over and his solitary over yielded eight runs, with Handscomb stepping down to take a boundary towards long-on.

Soon after, Khwaja brought up his fifty with a single of Jadeja. Handscomb and Khawaja s plan against the spinners was simple – whenever the ball was pitched up, they went for sweep and the duo went about their business in a measured manner, taking their team past the 150-run mark by the 27th over.

Khawaja got to his second hundred – in three innings – with a single past covers, but got out at the wrong time with India breaking the threatening stand with the bowling change of Bhuvneshwar. Khawaja drove an outside off stump delivery straight to the hands of Kohli at short extra cover. Khwaja made 100 off 106.

India mounted a comeback after that with Jadeja removing Maxwell caught by Kohli at extra cover. Jadeja was aided by the ball holding on to the pitch as Maxwell failed to get the elevation to clear the Indian skipper. Even though Handscomb got to his fifty, Shami got the well-set batsman with a rising delivery that took the edge to wicketkeeper Rishabh Pant.

Ashton Turner, Man-of-the-Match of the Ranchi ODI, started off with a sublime on-drive off Shami but after hitting a six off Kuldeep over long-on, perished attempting a similar shot in the same over for 20.

Marcus Stoinis was cleaned up by Bhuvneshwar in the 45th over as Australia slumped to 225/6. However, Jhye Richardson took 19 runs off Jasprit Bumrah’s ninth over, eventaully making 29 off 21 balls, helping Australia to a good total. 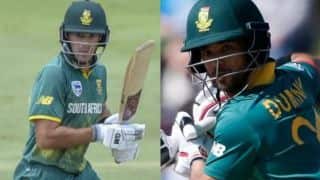 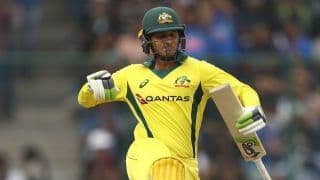