Wrist-spin accounted for six wickets as New Zealand folded for 157 in 38 overs on Wednesday at McLean Park, leaving India a target of 158 to claim the opening ODI.

Kane Williamson opted to bat on what appeared a good, hard batting deck in Napier, and soon found himself needing to resurrect the innings after Mohammed Shami and Yuzvendra Chahal made inroads. He scored a pretty 64, but once Williamson threw it away to become the first of Kuldeep Yadav‘s four wickets in a four-over spell as New Zealand lost their last five wickets for 24 runs. (LIVE UPDATES: INDIA vs NEW ZEALAND, 1st ODI)

New Zealand’s decision to drop their sole legspinner in Ish Sodhi may prove a crippling tactic after Chahal and Kuldeep took 6/82 in 20 overs.

After three ODIs in Australia, the roles were reversed between Shami and Bhuvneshwar Kumar during the Powerplay. Today it was Shami who dismissed the New Zealand openers, while Bhuvneshwar bowled an economical but wicketless spell. Shami hit terrific lines immediately and bowled Martin Guptill in a wicket-maiden opening over, in which he rapped the batsman on the pads with sharp movement and then found the inside edge when Guptill played forward uneasily.

That made Shami the fastest Indian bowler to 100 wickets in ODIs.

A second came in Shami’s second over, when he switched to around the stumps and had Colin Munro first ball with the change of angle. Shaping to drive, Munro was beaten completely by Shami’s delectable shape and heard the stumps rattle. Shami bowed out with figures of 4-2-13-2 from that spell. (LIVE SCORECARD: NAPIER ODI)

Ross Taylor scored his first run off his 11th delivery faced and then cracked two fours in the span of six balls to indicate he was ready to dominate, but on 24 he misjudged Chahal’s dip and hit back a low catch which the bowler did very well to claim. On 20, Williamson was given a huge slice of luck when he worked a short ball from Vijay Shankar to short fine leg where Kedar Jadhav put down the catch.

As he did at the MCG last week, Chahal teased the batsmen with his loop and drift, which then did for the returning Tom Latham. Latham had been committed to using his feet and whip the ball leg-side, and trying to charge Chahal he was duped into popping back another return catch. In five overs, Chahal had removed two big batsmen.

Williamson punched Chahal out of the attack with two sweetly-timed boundaries in succession, both shovelled over midwicket, to usher in Jadhav. Henry Nicholls thrashed a cut past point for four, Williamson ramped to the fine leg boundary and you sensed New Zealand had found a release point. Just like that, Nicholls whipped the ball towards mid-on where Kuldeep dived and held a stunner. New Zealand were five down in 24 overs.

Shami came back and pinned Mitchell Santner – in his first ODI since March 2018 – plumb in front for 14, and then came the wicket India really needed. Williamson had eased to his fifty in good time, looking unhurried and batting with the attractiveness that Virat Kohli had spoken of highly a day before. On 64, he chose to loft Kuldeep and found long-on. It was a surprising shot, because until then Williamson had been solid, and New Zealand’s tail had been exposed.

Kuldeep ended his over by having Doug Bracewell bowled for 7 when dragging a wide ball onto his stumps, capping a tremendous double-wicket maiden.

A drop by Shikhar Dhawan at long-off gave Tim Southee a life on 0 but it did not cost India much. Kuldeep won an lbw shout to add Lockie Ferguson without scoring and then had Trent Boult edging to slip to finish with 4/39, all four wickets coming in a massive spell of 4-1-13-4. 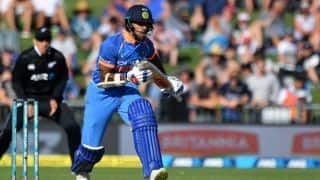