Chahar finished with 3/26 and Tahir, 2/23 before Kieron Pollard's 41 off 25 balls gave MI a respectable total.

Chennai Super Kings need to chase down a target of 150 to lift a record fourth IPL title after the efforts of Imran Tahir and Deepak Chahar overcame a strong start from Mumbai Indians in the final. MI had raced to 45 without loss in five overs before their progress fell off track. Chahar finished with 3 for 26 and Tahir, 2 for 23, and had Kieron Pollard‘s knock of 41 off 25 balls not arrived in time at the death for MI, the result could have already been a foregone conclusion. (ALSO READ: IPL Final Live Updates)

Opting to bat first, Quinton de Kock got MI off to a blistering start. Having scored just 27 in the previous three games against CSK this season, de Kock took on Chahar for three sixes in the third over to launch an early assault. De Kock, finding the middle of his bat, then attacked Shardul Thakur, flaying him for a monster hit into the stands to get MI cruising inside the Powerplay. However, in an attempt to launch his fifth six, he was done in by the pace of Thakur and gloves a pull to MS Dhoni. (ALSO READ: McClenaghan replaces Jayant for Mumbai)

Besides a couple of half-centuries, Rohit Sharma was yet to get a big one going, though when he smoked a thunderous pull of Chahar over deep square leg, one felt this might be the occasion. The MI captain gained in confidence with a sweep off Harbhajan Singh but nicked an away going to an ambitious drive. After the initial assault, Dhoni turned to spin, and who else that Harbhajan responded well. Couple that with Dwayne Bravo‘s variations, scored just 13 runs between overs six and nine, one of which was a wicket-maiden by Chahar.

After a quiet period of play, Ishan Kishan broke the shackles and clubbed three boundaries. Suryakumar Yadav, who was the game-changer the last time these two sides met in Qualifier 1, survived a close chance when one of his heaves escaped Ravindra Jadeja sprinting from deep midwicket to what could have been the catch of the tournament. MI were just beginning to gain steam again, before Dhoni pulled off another ace Tahir.

With CSK on top, MI fell back upon the two players, who have time and again bailed them out of trouble Pollard and Hardik Pandya, and they answered the call emphatically. Pollard spanked Tahir down the ground and over the ropes twice before executing a crunching six off Thakur. Pandya was on 4 when his simplest of catches was grassed by Suresh Raina. Next ball, the allrounder helicoptered a six to add salt to wound.

Chahar made up for Raina’s lapse, getting Pandya out leg before wicket, the review not saving him, and struck again two balls alter to produce a phenomenal penultimate over conceding four runs. Despite the umpire missing out on a wide, which prompted Pollard to take guard almost on the edge of the pitch, the West Indies allrounder drilled Bravo for a couple of boundaries to cap off the innings. 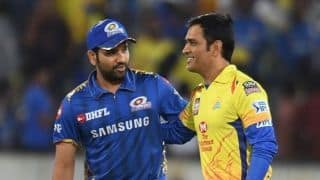