Parthiv Patel's half-century combined with lusty blows towards the end from Moeen Ali and Marcus Stoinis lifted the total to 158 for 4.

In search of their first win in the tournament, the Royal Challengers Bangalore have set Rajasthan Royals a target of 158 after legspinner Shreyas Gopal shone with terrific figures of 3 for 12. Gopal’s three big wickets hurt RCB after a solid start but Parthiv Patel‘s half-century combined with lusty blows towards the end from Moeen Ali and Marcus Stoinis lifted the total to 158 for 4. (READ: Match Highlights)

Reverting to their opening combination of Virat Kohli and Parthiv from the first game, the pair batted sensibly inside the Powerplay and helped RCB march on to score 48 in their best start of the tournament. Kohli showed intent from the very first over, collecting his first boundary off Krishnappa Gowtham. But ever since, the skipper struggled to find his timing, managing a streaky four off an edge and one-handed aerial flick towards midwicket. Captaining his 100th game, Kohli was foxed by Gopal’s wrong one, a ball after Kohli survived a close leg before shout. (READ: Kohli third to captain 100 games in IPL)

Gopal then tightened the screws adding another big, AB de Villiers, again, with a googly. A flighted delivery, flummoxing de Villiers to offer a return catch. Kohli and de Villiers pretty high-profile wickets to get. And if that wasn’t enough, Gopal added a third dismissal of a wrong one which saw Shimron Hetmyer poking outside off and offering a feather to Jos Buttler.

Maintaining the tempo was Parthiv, who set the tone in Jofra Archer‘s first over, smacking three boundaries off the England allrounder all contrasting shots: a flick, an upper cut and a straight drive. Seeing three wickets fall at the other end, Parthiv decided to target Varun Aaron and took the pacer for two boundaries in an over that leaked 16 run.

Later, it was Ben Stokes‘ turn to face the heat as he was pulled for a six and cut for a boundary. His assault caught Royals off-guard, to the extent that Archer overstepped, a delivery off which Parthiv brought up his half-century (29 balls). Stoinis, making his debut for RCB, made the most of a free-hit next ball. Parthiv took one more boundary and completed 4000 T20 runs before perishing in the deep in a bid to accelerate.

Parthiv’s wicket opened a small window for Rajasthan to come back, one in which they restricted Moeen and Stoinis to merely singles, and on occasions, the odd double. But a six from Moeen off Archer first ball of the 20th gave RCB a lift. The England allrounder followed it with a boundary and Stoinis ended the innings with a flourish with yet another four as RCB collected 17 in the final over. 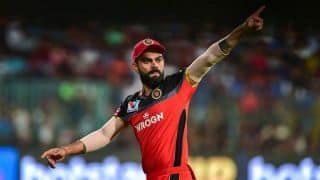