Will Young smashed his second century in a row on Friday, mastering a full-strength Australian attack led by Pat Cummins and Mitchell Starc.

Unheralded New Zealand batsman Will Young smashed his second century in a row on Friday, mastering a full-strength Australian attack led by Pat Cummins and Mitchell Starc in a World Cup warm-up match.

The 26-year-old, who is uncapped and not part of New Zealand’s World Cup squad, followed up his classy 130 against the Aussies on Wednesday by reaching another ton with a pull for six over mid-wicket.

He eventually fell to Marcus Stoinis for 111 as a weakened New Zealand, missing some of their top players, made 286 for nine off their 50 overs in the unofficial game in Brisbane which is not counted as a full international.

Opener George Worker hit 59 with Cummins the best of the bowlers, taking 4-32 off eight overs.

Cummins and Starc, who took one wicket, were playing together for the first time in three months as the latter returns from injury.

The three-match series is tied 1-1, with Australia aiming for a confidence-boosting win before heading to England to defend their World Cup title.

They won a close opening game at Allan Border Field by one wicket while their trans-Tasman rivals bounced back to easily claim the second by seven wickets.

Steve Smith and David Warner are again in the team as they continue their comeback to international cricket after serving one-year bans for ball-tampering.

Warner will open for Australia alongside Usman Khawaja as coach Justin Langer continues to tinker with his top order. Smith, who made 89 not out in the second game on Wednesday, is due to come in at first drop. 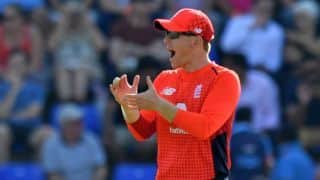 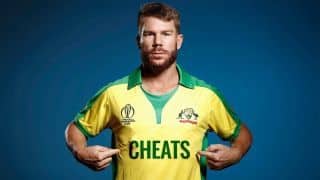