Williamson was unbeaten on 166 at lunch on day three in Hamilton, joining openers Tom Latham (161) and Jeet Raval (132) on three figures.

Kane Williamson completed the rare feat of centuries by the first three batsmen in an innings as New Zealand continued to build a substantial lead over Bangladesh in the first Test on Saturday. Williamson was unbeaten on 166 at lunch on day three in Hamilton, joining openers Tom Latham (161) and Jeet Raval (132) on three figures.

New Zealand finished a free-scoring morning at 605 for six, extending their lead to 371 after putting on 154 in the session. It is only the 13th time in the history of Test cricket, and the second time by New Zealand, that the first three batsmen have scored centuries in the same innings. (READ: Day 2 report – New Zealand bury Bangladesh)

But for the hapless Bangladeshis it is the third time they have been on the receiving end, most recently in 2017 against South Africa in Bloemfontein and before that against India in Dhaka in 2007. New Zealand previously achieved the feat against India in 2003.

For Williamson it has been an innings of milestones as he became the first New Zealand to post 20 centuries. In the course of his 71st Test he has also passed 6,000 runs, becoming the fourth and fastest New Zealander to do so and with the best average of 52.79.

Williamson started the day on 93 and was content to take a back seat while Neil Wagner pushed the score along in a 60-run stand for the fourth wicket. Wagner finished with his Test-best 47 of which 42 runs came from boundaries — six fours and three sixes. His rollicking innings came to an end when he was caught behind to give Ebadat Hossain his first Test wicket.

Replacement batsman BJ Watling was out on the last ball before lunch for 31. 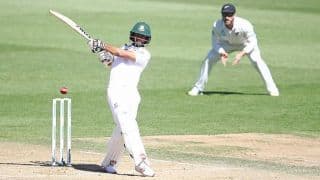