A gritty half-century from Mohammad Mithun gave Bangladesh some hope as the tourists set New Zealand a modest target of 233 after suffering an early collapse in the first one-day international in Napier on Wednesday.

Mithun top-scored with 62 after coming to the crease with Bangladesh reeling at 42/4 as their decision to bat first after winning the toss backfired. He survived 90 balls, grinding out his third ODI fifty, after Bangladesh’s top order fell to a combination of rash shots and accurate bowling.

Mohammad Saifuddin provided support with a hard-fought 41 as Bangladesh were bowled out for 232 with seven balls of their allotted 50 overs remaining.

Bangladesh batting coach Neil McKenzie admitted 300 was probably a par score on the McLean Park pitch in good scoring conditions, although the tourists will hope their total is defendable against a New Zealand side coming off a 4-1 ODI series loss to India. (FULL SCORECARD: NZ vs BANGLADESH, 1st ODI)

The Black Caps struck early when Tamim Iqbal departed for five in the second over and Liton Das soon followed, leaving Bangladesh at 19/2. A rattled Mushfiqur Rahim was out for five a few balls after a Boult bouncer struck him on the helmet. Despite the early wickets, a defiant Soumya Sarkar played his shots, including a booming six off Matt Henry that almost made it onto the roof of the stand.

He smashed 30 off 22 balls before Henry had his revenge when he caught and bowled the batsman.

Sabbir Rahman summed up Bangladesh’s batting woes when he was stumped trying to sweep Mitchell Santner to the boundary. Rahman’s foot slipped as he crouched for the shot and he tumbled to the ground just outside his crease as wicketkeeper Tom Latham whipped off the bails.

Bangladesh are chasing a maiden victory over the Black Caps on New Zealand soil after failing to beat the hosts in any format during four previous tours. 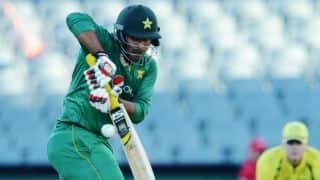