Trent Boult recorded his maiden ODI hat-trick that paved the way for New Zealand s 47-run win over Pakistan in the first one-day international at Abu Dhabi. Boult struck early to reduce Pakistan to 8 for 3 in the chase, a situation from where the home team could not recover and chasing 267 to win, were bowled out for 219 in 47.2 overs.

Boult first dismissed Fakhar Zaman after angling a back-of-a-length into the pads of the southpaw, who edged it on to the stumps. Zaman departed for just 1. He then fired in a wide yorker which Babar Azam tried to jab at, but ended up finding the edge before it carried to Ross Taylor at first slip. Boult, who has taken 122 wickets in 66 ODIs, completed his hat-trick with the wicket of Mohammad Hafeez, who was out plumb leg before.

Hafeez reviewed but his call would be turned down by the third umpire. Pakistan later went on to play the price for a bad review when Shadab Khan was given out caught behind when there was daylight between bat and the ball. Pakistan tried to stage a recovery through Imam Ul Haq and Shoaib Malik, who added 63 for the fourth wicket, but their dismissals, in a span of six balls and two runs dented Pakistan s progress. The dismissals brought out captain Sarfraz Ahmed and allrounder Imad Wasim and the pair resisted with an inspiring 103 run-stand with both scoring their respective half-centuries. But just when it seemed that they might see Pakistan home, Sarfraz played on a delivery from Colin de Grandhomme.

Wasim registered his half-century off 71 balls but perished to the pressure of a climbing asking rate of 13. Tim Southee and Lockie Ferguson cleaned up the tail with Pakistan losing their last three wickets without adding a run.

Earlier, Taylor s 80 and Tom Latham s 68 powered New Zealand to 266/9. Opting to bat, New Zealand lost openers George Worker and Colin Munro inside eight overs. Worker added just one to the total and departed after he was caught behind by Sarfraz off left-arm pacer Shaheen Shah Afridi. Munro smashed five boundaries during his 27-ball 29 but was trapped leg before off Shadab in the eighth over.

Kane Williamson didn t stay for long after he picked up Hafeez at short midwicket to give leg-spinner Shadab his second wicket. The Kiwi skipper departed for 27 off 38. It took a 130-run partnership for the fourth wicket between the veteran Taylor and Latham to steer the tourists, who were at 78/3 in the 17th over when Williamson departed. Latham was more aggressive in his 64-ball knock that was decorated with five hits to the fence.

New Zealand were looking at a 280-plus score, but Pakistan pegged things back in the 42nd over with Shadab taking three wickets in four deliveries.

Latham was the first to go after he tried to flick it, but missed it completely and was out lbw. Henry Nicholls failed to read the next delivery which dipped a bit and caught him plumb leg before. de Grandhomme avoided Shadab s hat-trick, but followed Nicholls in the next delivery after Babar Azam picked up a low catch at first slip. New Zealand were 208/4 were Latham departed and slumped to 208/6 when de Grandhomme walked.

The flurry of wickets continued in the next over with the departure of well-set batsman Taylor, who brought up his 42nd ODI half century. Imad floated it nicely outside off and drew Taylor, who missed it completely before clattering into the stumps.

Ish Sodhi and Southee stemmed the flow of wickets and ensured New Zealand past the 250-run mark. Sodhi scored a valuable 19-ball 24, while Southee added 20, before both departed to Afridi, who picked up four wickets in his eight overs and went for 46 runs. 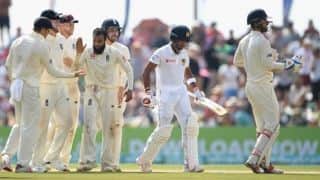 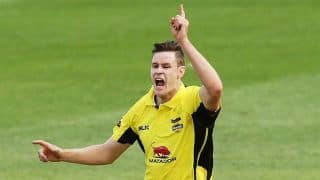