New Zealand women registered a 23-run win to take the first T20I after India visitors imploded to lose nine wickets for 34 runs in chase of 160. With Mithali Raj rested, India women seemed to be cantering towards the target at 102/1, but in a dreaded throwback to the 2017 World Cup final, the batting imploded and New Zealand held their nerves to bowl India out for 137 in the final over.

Asked to bat first, Sophie Devine struck a half-century and along with Amy Sattherwaite and Katey Martin’s late bursts, helped New Zealand women post a competitive 159 for 4, in reply to which India lost opener Priya Punia in the first over. But Smriti Mandhana and Jemimah Rodrigues put the run chase back on track with a solid 98-run partnership for the second wicket.

Mandhana, continuing her belligerent form, once again looked in imperious touch. She was underway with back-t-back boundaries off Lea Tuhutu. Rosemary Mair was dished a harsh treatment with Mandhana taking her for two sixes and a four off her first over to go with two more boundaries off Devine the over after. Mandhana reached the sixth half-century off her career off just 24 balls – a six over deep midwicket over Devine as India seemed to be cruising along.

Rodrigues began emphatically as well. She caressed three consecutive boundaries off Leigh Kasperek before taking the backseat to witness Mandhana’s fireworks. With New Zealand missing the services of Frances Mackay, who went off the field after twisting her right ankle having bowled just three deliveries, the attack missed the edge and Mandhana and Rodrigues cashed in with some lusty blows and brining up the 100 for India in the 12th over.

However, once Amelia Kerr broke the partnership, the wheels came off. Mandhana and Rodrigues departed in a span of four balls and one run. Tahutu dismissed D Hemlatha and Anuja Patil in the same over, followed by the wickets of Arundhati Reddy, Deepti Sharma and Taniya Bhatia. Skipper Harmanpreet Kaur tried to resist but with New Zealand mounting pressure and the asking rate climbing up, she was out stumped, and effectively it was all over for India. A few ambitious shots later, Devine picked up the final wicket.

It was fitting for Devine to have picked up the final wicket, for it was her half-century in the first innings that had held the New Zealand innings together. India got an early breakthrough removing Suzie Bates cheaply, but Devine’s ninth T20I half-century and Martin’s cameo of 27 off 14 got New Zealand to a respectable total.

Left-arm spinner Radha Yadav struck in the second over to remove Bates for 7. Devine and Caitlin Gurrey had batted positively to put 36 runs for the second wicket before debutant Gurrey was cleaned up by medium pacer Reddy. At 47 for 2, two of New Zealand’s most experienced campaigners – Devine and skipper Amy Sattherwaite – came together and stitched a 69-run stand for the third wicket.

Devine began the assault by launching Anuja Patil for a six over deep square leg, followed by Sattherwaite collecting three boundaries in four balls in the next over by Poonam Yadav. As New Zealand women pushed after the 10-over mark, boundaries started to come. Devine pushed Poonam towards long-on for a single to bring up her fifty off 41 balls and stepped on the gas with consecutive boundaries off Reddy.

Sattherwaite did not hold back either and was equally effective, though she lost her concentration at a crucial juncture to give her wicket to Deepti Sharma (1/19 from four overs), shortly after Reddy had struck with the big wicket of Devine. With 121 on the board and three and a half overs left, India seemed to be edging back into the match, before Martin took over. 21 came off the final 12 deliveries with Martin finishing the innings with two sixes off the last over from Radha. 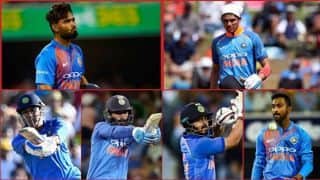