In a rain-affected affair, India managed 169/7 while chasing a revised target of 174 in the first T20I of the three-match series, giving Australia a 1-0 lead.

The first match of India‘s two-month long tour of Australia has laid down the marker for a close contest with the hosts sealing a thrilling four-run win via DLS in Brisbane. In a rain-affected affair, India managed 169/7 while chasing a revised target of 174 in the first T20I of the three-match series, giving Australia a 1-0 lead.

At the heart of their victory was an all-round show from Marcus Stoinis who first pushed them to a challenging 158/4 with an unbeaten 33 off 19 and then defended 13 runs in the final over that included two wickets as well to finish with figures of 2/27.

However, the contest had its share of twists and turns. India’s chase received an early push from opener Shikhar Dhawan’s blistering innings as he scored 76 off 42. The chase went off track when Adam Zampa dismissed KL Rahul and Virat Kohli in his successive over. And when Dhawan holed out off Billy Stanlake, Australia were well and truly on top.

But Rishabh Pant and Dinesh Karthik unleashed a flurry of boundaries to keep the contest alive. Andrew Tye was milked for 25 runs with Pant and Karthik hitting a four and six each in it. With India needing 35 off 18, the equation wasn’t daunting. However, Aaron Finch persisted with Tye and Stoinis who held their nerves to limit them to 30 runs in them.

While Indian innings was powered majorly by Dhawan while Karthik contributed with 30, Australia were boosted by the trio of Glenn Maxwell, Chris Lynn and Stoinis who laid into Indian attack. The match was reduced to 17-overs-per side after a lengthy rain delay.

The partnership between Maxwell and Stoinis was especially important, as they added 78 runs in quick time. It was also vital in bringing their innings back on track after Kuldeep Yadav struck in successive overs to put a dent in their progress.

Maxwell was out immediately after the rain-break but had smashed 46 off 24 with four sixes during his stay. Stoinis remained unbeaten on 33 off 19 with three fours and a six.

Australia were off to a cautious start after India captain Virat Kohli opted to field. But Kuldeep Yadav struck with his first delivery of the match, removing D Arcy Short for 7.

Captain Finch survived a dropped catch and seemed to be capitalising on it before Kuldeep outfoxed him with a wrong un to have him caught at backward point for 27. But Lynn was in some mood as he belted three sixes in an over of Khaleel Ahmed.

Kuldeep ended his blitz with another wrong un, accepting a comfortable return catch. Lynn struck one four and four sixes during his 20-ball 37.

At 75/3, the hosts seemed to be going off track but the pair of Maxwell and Stoinis took over and began their assault. Stoinis began with a couple and a four off the first two delivery faced. He then successfully reversed an lbw decision against Krunal Pandya.

Krunal would end up leaking 55 runs in four wicketless overs including one in which he was creamed for three successive sixes by Maxwell. Australia were 152/3 when rain interrupted the proceedings.

Khaleel at third man had dropped Stoinis off the first delivery of 17th over when rain forced the players out of the field. When the match finally resumed, Australia were left with just five deliveries of which they made five runs apart from losing Maxwell. 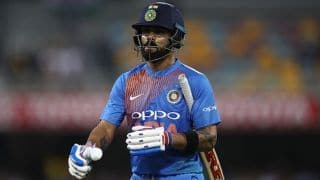 We started well with the bat, but fumbled in the middle overs: Virat Kohli