Kusal Mendis was 21 at the lunch break, with Sri Lanka needing 364 runs to win.

Three wickets in the second hour on the fourth morning, including that of Dhananjaya de Silva to close the session with Sri Lanka at 98/3, has left England seven wickets away from taking the first Test in Galle.

Sri Lanka began the day on 15/0 – 447 runs away from their victory target – and did well to progress to 51 before the left-arm spin of Jack Leach brought the England their first wicket in the 23rd over. Kaushal Silva, on 30, was pinned lbw when he mistimed a sweep. The batsman reviewed, but in vain.

England had an opening, and with the ball turning it was not not long after that Moeen Ali got into the act, courtesy a rush of blood to the head for Dimuth Karunaratne. On 26 from 86 balls, he charged out to Moeen and hit back a struck catch that Moeen did well to clutch onto for his 150th Test wicket.

Sri Lanka had thus lost their openers in the span of 17 deliveries.

De Silva applied himself well during his 21 off 44 balls, hitting Moeen for six, but in the over lunch pushed loosely at Ben Stokes and was taken by first slip by Joe Root. Kusal Mendis was 21 at the break, with Sri Lanka needing 364 runs to win. 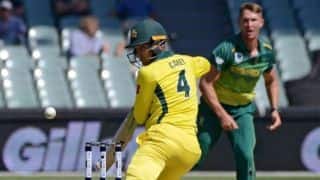