Khawaja, 50 overnight, added 32 runs to his total in 79 balls while Head moved from 34 to a fifty on Test debut

The overnight pair of Usman Khawaja and Travis Head has batted through the fifth morning in Dubai to raise hopes of a miraculous Australian escape against Pakistan. Resuming on 136/3 after Mohammad Abbas triple-strike dented Australia s progress on Wednesday evening, Khawaja and Head denied Pakistan for 29 overs to take the score to 215/3 by lunch still 247 runs shy of a target of 462 but critically eating up 47.2 of the 137 overs they need to survive.

Khawaja, 50 overnight, added 32 runs to his total in 79 balls while Head moved from 34 to a fifty on Test debut. Their fourth-wicket partnership was a mix of defensive fortitude and technical superiority mixed with some close shouts and fortuitous moments. They countered reverse swing with leaves and inside edges and produced come pleasing drives and sweeps to extend their alliance to 128.

Head, who was out for a duck in his debut innings, got to his half-century in 119 balls with a cut off Bilal Asif to deep point just moments after he survived a very good lbw shout from Yasir Shah. On 44, the left-hander mistimed a sweep and was struck on the pads, but Pakistan did not review and replays showed the ball would have hit middle stump. He also had close calls against Bilal Asif and Wahab Riaz, playing and missing at the debutant offspinner and slashing at the left-arm quick only to connect with hot air. There was also a shooter from Abbas that Head just managed to jab bat down onto.

Khawaja also had some tense moments, such as when he was beaten by Abbas teasing movement early in the day and then just got his back leg down in time against the same bowler when Sarfraz Ahmed moved upto the stumps. In the penultimate over before lunch, Pakistan reviewed an lbw shout against Khawaja which was retained as the umpire’s call stood, with replays showing the batsman had done enough to get outside the line. 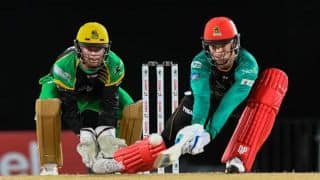