Australia were 289/5 at tea, importantly ensuring that 109 of the 137 overs needed to survive have been eaten into.

Australia found their immovable object in Usman Khawaja who marched into the tea break on day five in Dubai unbeaten on 122 off 268 deliveries to stand between Pakistan and imminent defeat. A miraculous Australian escape still needs the visiting team to survive a session, but in Khawaja they have found a batsman willing to show that success can be achieved in tough conditions in the UAE.

With his skipper Tim Paine for company, Khawaja took Australia to tea on 289/5 – still 174 runs shy of a target of 462 but more importantly ensuring that 109 of the 137 overs needed to survive have been eaten into.

Khawaja, 50 overnight, extended his partnership with Travis Head to 132 before the debutant was dislodged for 72 off 175 balls by Mohammad Hafeez, who won an lbw shout with his first delivery bowled with the second new ball. Then Yasir Shah picked up the other debutant, Marnus Labuschagne, who on 13 was undone by the legspinner’s guile and went back in his crease. Pakistan had Australia at 252/5, after a wicketless morning session, but Khawaja was batting on a very fine century – his first in Asia.

Paine took a cue and blunted Pakistan’s bowlers in admirable manner to assist Khawaja into the tea interval, not out 19 off 83 balls.

Khawaja’s approach on Thursday was the same as he adopted on day four, and with Head he denied Pakistan for 29 overs to take the score to 215/3 by lunch. He added 32 runs to his total in 79 balls in this time while Head moved from 34 to a fifty on Test debut. Their fourth-wicket partnership was a mix of defensive fortitude and technical superiority mixed with some close shouts and fortuitous moments. They countered reverse swing with leaves and inside edges and produced come pleasing drives and sweeps to extend their alliance to 128.

Head, who was out for a duck in his debut innings, got to his half-century in 119 balls with a cut off Bilal Asif to deep point just moments after he survived a very good lbw shout from Yasir. Khawaja also had some tense moments, such as when he was beaten by Abbas teasing movement early in the day and then just got his back leg down in time against the same bowler when Sarfraz Ahmed moved upto the stumps. In the penultimate over before lunch, Pakistan reviewed an lbw shout against Khawaja which was retained as the umpire’s call stood, with replays showing the batsman had done enough to get outside the line. 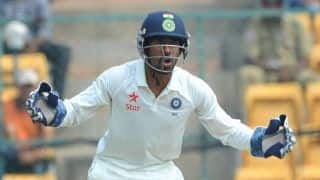 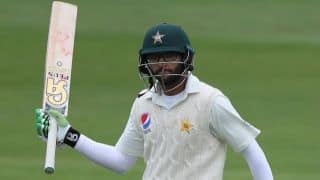