Australia broke their seven-match losing streak with a seven-run win over South Africa in the 2nd ODI at the Adelaide Oval to level the three-match series 1-1 on Friday.

Australia broke their seven-match losing streak with a seven-run win over South Africa in the 2nd ODI at the Adelaide Oval to level the three-match series 1-1 on Friday.

After being bundled out for 231, Australia managed to restrict South Africa to 224/9 despite David Miller’s 51. For Australia Marcus Stoinis picked 3/35 in his ten overs while Mitchell Starc and Josh Hazlewood picked two wickets each.

Kagiso Rabada had earlier picked 4/54 as Chris Lynn (44) and Alex Carey (47) helped Australia to a decent total after being put in to bat.

Starc and Hazlewood started off well bowling a tidy line. That yielded the wicket of Quinton de Kock taken by Starc for nine. Aiden Markram was run-out for 19 in the tenth over. Wickets of Reeza Hendricks – by Hazlewood – and Heinrich Klassen – by Stoinis – left South Africa reeling at 68/4.

However, skipper Faf du Plessis and and David Miller got together for a stand of 74 runs for the fifth wicket to revive South Africa. Pat Cummins though provided the vital breakthrough for Australia claiming du Plessis, when the SA skipper played one on to his stumps and departed for 47.

Miller kept SA hopes alive but failed to find any support with allrounder Dwaine Pretorius playing out 32 deliveries for his 14 runs as Australia came back strongly in the last ten overs.

Stoinis accounted for Miller in the 44th over and then send back Dale Steyn for three to effectively end South Africa’s hopes.

Lungi Ngidi chanced his arms around for his 19 off 20 balls, taking the match to the final over. Glenn Maxwell, then managed to defend seven off the 20 runs needed.

Earlier, Rabada and Pretorius (3 for 32) ran through Australia’s middle order and had them eight down for 187. With another low total beckoning, Zampa and Hazlewood frustrated South Africa as Australia’s last two wickets added crucial 44 runs.

Opting to field after winning the toss, Ngidi drew first blood by removing Travis Head early. Head was out LBW before captain Aaron Finch and Shaun Marsh made steady progress. Finch and Marsh’s second-wicket stand accounted for 54 runs before Rabada had the left-hander out caught behind.

Aaron Finch’s dismissal – playing on to Pretorius – triggered a slide for Australia. Lynn scored a run-a-ball 44 with three boundaries and two sixes and vice-captain Carrey made 47 off 72. Lynn got off to a start and having taken Rabada for 6, 4, 4 and 4 in one over, edged the next ball to de Kock, who took four catches behind the stumps. Maxwell endured another failure and scored just 15.

Pretorius did the damage in the middle order to remove Maxwell and allrounder Stoinis. Steyn then returned to get rid of Cummins and Starc for single-digit scored to leave Australia in danger of getting bowled out inside 200. But Zampa and Hazlewood resisted to play out the next eight and a half overs. The legspinner scored 22 off 24 with two boundaries before he was the last man dismissed. 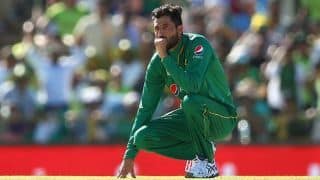