The second ODI between India and West Indies was always going to be about Virat Kohli‘s 10000th ODI run, and while the Indian captain did smash Sachin Tendulkar’s record to become the fastest to the landmark, the match came to be known for a lot more. Shimron Hetmyer, who had lit up the first ODI in Guwahati, launched an attacking 64-ball 94 to set up the run chase beautifully, while Shai Hope built on it and took the game into the last over with an unbeaten 123. But as things would turn out, the game was so evenly-contested that no side deserved to lose.

And sure enough, neither did.

With 14 needed to win off the last over, West Indies fell short by one win, ending the game in a tie. After Hope took a single off the first ball, the next one deflected off Ashley Nurse’s pads and resulted in four leg byes. They ran the next one for two before Nurse found Ambati Rayudu at third man. Seven needed off two, Hope and Kemar Roach scampered for another double before Umesh landed the final delivery full and wide outside off stump. Hope sliced it behind point had implied just enough power to beat a diving Rayudu. Four was signalled, the game was tied. The second one in four games for India, and between these two sides.

Jason Holder had partnered Hope for 47 runs before a terrible piece of run out saw the Windies skipper head back. Yuzvendra Chahal bowled a tidy 48th over to give away just two runs. Mohammad Shami then gave away just six off the penultimate over of the game. The pendulum, in favour of the visitors till then, swung in favour of India before the last-over drama unfolded.

Hetmyer missed out of a second straight century by six runs but it was enough to dominate a passage of play which set the base for West Indies’ five-wicket win over India. Hetmyer came in when West Indies had lost two quick wickets to Kuldeep Yadav‘s wrong ‘uns and resurrected the proceedings with a partnership of 143 with Hope. He eventually departed with West Indies still needing over 100 runs to get, but his partner, Hope, there onward, took over and remained not out till the end en route to his third ODI century.

With India removing Hetmyer and Rovman Powell in quick succession, India sniffed an opening, But West Indies benefitted from Hetmyer’s assault that saw him tonk seven sixes and four boundaries to place them at the comfort of a gettable run-rate. West Indies were scoring almost at the rate of seven, while the asking rate was inside six.

Hope’s innings was almost the follow-up act to Hetmyer’s blistering assault. It wasn’t like he went after the bowling. Instead, he and Holder rotated the strike to bring West Indies within striking distance. He began with a flourish, his first three boundaries coming in a gap of six deliveries. Hope launched Ravindra Jadeja for a six and a four off the 15th over before restricting himself. He went boundaryless in the next 10 overs but broke the shackles at the right time to bring West Indies within striking distance of victory.

Hetmyer was equally impactful. An innings that had ‘Caribbean’ written all over it, Hetmyer was severe on the spinners. His first five boundary-scoring shots were all sixes two each of Jadeja and Kuldeep and one off Chahal. He reached his fifty off 43 balls and scored the next 44 off 20 before falling to a half-tracker.

The first half of the game was dominated by Kohli. He registered his 37th ODI century to drive India to their second 300-plus total of the series. Ambati Rayudu aided the Indian captain in a 139-run partnership for India’s third wicket, but once he departed, Kohli produced another masterclass at a venue where he simply loves to score. During his innings, Kohli conquered a couple of more impressive feats. He overtook Tendulkar (1573 runs) to become the leading run-scorer for India against West Indies in ODIs and became the fastest to score 4000 by a batsman at home. Receiving a reprieve on 44, Kohli punished West Indies.

Rayudu, the man who Kohli had shown support to cement himself as India s No. 4, answered his captain’s call. He came in at the fall of Dhawan’s wicket who seemed to be getting into his elements and began with a crisp cover drive and scored four boundaries in nine deliveries. He reached his ninth ODI fifty off 61 deliveries. A third century ODI was in sight but 27 short of it, he missed a slog sweep and was bowled for Nurse’s second wicket. As the euphoria surrounding Kohli’s feat settled, West Indies got two quick wickets Debutant Obey McCoy tricked MS Dhoni with a slower one, Marlon Samuels ended Rishabh Pant’s debut ODI innings on 17.

With six overs to go, the way Kohli switched gears was phenomenal. Shortly after he brought up his 1000th run this calendar year, making him the quickest in terms of innings (11), Kohli smoked Roach deep into the crowd at long-on. Two balls later, McCoy’s length ball was muscled into the second tier at cow corner. The final two overs fetched India 21 runs, with Kohli bringing up his fourth 150-plus score in ODIs. 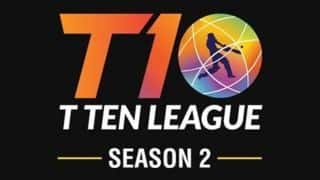 PCB issues NOCs to players for participating in T10 league 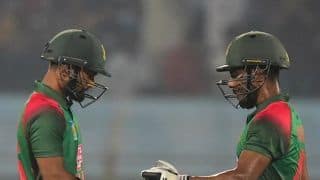