South Africa dominated the T20I series by registering an easy six-wicket win over Zimbabwe in the second game.

After taking the honours in the one-day leg, South Africa dominated the T20I series by registering an easy six-wicket win over Zimbabwe in the second game. South Africa s fast bowling duo of Dane Paterson and Robbie Frylinck, picked up two wickets each to keep Zimbabwe to a modest 132/7, after which their experienced batting line-up chased the target with 26 balls to spare.

Zimbabwe were guilty of losing too many wickets courtesy some fine bowling from Paterson, Frylinck and Tabraiz Shamsi. Hamilton Masakadza and Solomon Mire were once again unsuccessful in providing a successful start for Zimbabwe. The openers were removed by Paterson and Frylinck and with Zimbabwe struggling at 35 for 3 in the seventh over, the experience of Brendan Taylor and Sean Williams came to fore to give the visitors some hope.

Taylor and Williams added 29 steady runs before the former captain was dismissed by Shamsi. It was a result of getting a move on with South Africa mounting excessive pressure through another pacer Andile Phehlukwayo, who produced a tight spell of 4-0-15-0. With Taylor gone, the responsibility fell completely on William s shoulder and he did not disappoint. He took calculated risks and thwacked three sixes oh Shamsi s third over. Despite those sixes and two boundaries, Williams had added 41 off 28 before he became Paterson s second wicket.

Once Williams departed, that was it for Zimbabwe. At the time of his dismissal, Zimbabwe were 101 in the 16th over, and went on to add just 31 more in the final four.

The surface was testing with plenty of variable pace and bounce on offer, but unlike Zimbabwe, South Africa were not troubled by it. Rassie van der Dussen was the first wicket to fall, but Chris Mpofu but Quinton de Kock was solid at the other end, to the effect that Kyle Jarvis was taken for 29 in his first two overs. The wicketkeeper batsman, having scored 26 off 23 with three fours and a six was out bowled, and the wicket of Faf du Plessis in the next over, injected some life in the visitors.

But just when it seemed that Zimbabwe could make do something of the situation, JP Duminy exhibited his class. Heinrich Klaasen scored a 15-balll 22 and added 44 off 29 with Duminy. Klaasen departed but David Miller, along with Duminy knocked off the remaining 31 runs, with the left-hander remaining unbeaten on 33 with three fours and a six. 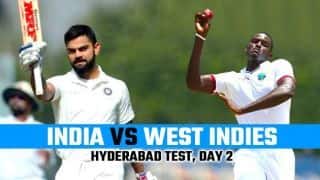 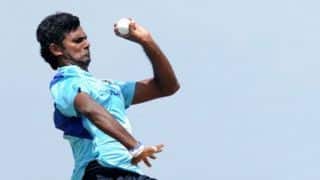