Fakhar Zaman (94) and Sarfraz Ahmed (78*) put on 147 for the sixth wicket after Nathan Lyon's dramatic strikes in the morning.

The debutant Fakhar Zaman and captain Sarfraz Ahmed were at the forefront of a resounding fightback from Pakistan during the afternoon session on day one of the second Test in Abu Dhabi, following a stunning pre-lunch collapse at the hands of Nathan Lyon.

Four wickets in six balls to Lyon saw Australia roar back late in the opening session as Pakistan slumped from 57/2 to 57/5 on Tuesday, but a stand of 147 between Fakhar (94) and Sarfraz (78*) carried to the doorstep of tea before Marnus Labuschagne claimed the debutant six runs short of a century.

Sarfraz led the counter-punch from the time he walked in at 57/5, hitting seven fours in his 95-ball innings. Zaman, dropped on 30 just moments before Lyon took two wickets in two balls to put Pakistan in a spin, then overcame a run-out chance before lunch to battle his way to 94 before he departed.

This partnership came after Lyon got with the wicket of Azhar Ali for 15, missed a hat-trick after getting Haris Sohail first ball and then added Asad Shafiq and Babar Azam for ducks. In the over after Marnus Labuschagne dropped at midwicket off Jon Holland s left-arm spin, Lyon held a return catch off Azhar (15) and then had Sohail edging to silly point where Travis Head took a superb reflex catch to leave Lyon on a hat-trick.

It was not be, but in his fifth over Lyon had Shafiq inside-edging to short leg where Labuschagne held on and then Azam bowled as he looked to drive his second ball inside-out. Zaman was nearly run out in Lyon s next over, saved as he somehow managed to ground his bat after diving into the crease. Zaman cut Holland for four off the last ball of the morning to get to 49 off 88 deliveries and duly reached his fifty when play resumed.

Sarfraz began with three fours in one Peter Siddle over, and his approach gathered him runs through dabs, steers and cuts. Sarfraz s busy innings saw him play Lyon well, at times using his feet to smother the turn and drive boundaries over mid-on and over midwicket.

Mitchell Starc was driven and cut with power by Zaman, Lyon placed delicately off the back foot and Holland easily manoeuvred into the gaps as the star with Sarfraz grew at a good clip. He moved into the nineties wth a huge six off Jon Holland and then on 94, off Labuschagne’s legspin, survived a very good lbw shout when replays showed the thinnest of inside edges.

However, the bowler had his man three balls later when sharp turn trapped him in front., and this time the review did not save Zaman. 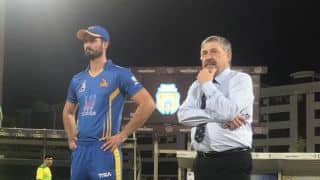