Pakistan went from 57/1 to 57/5 with Lyon taking four wickets in five balls; the debutant Fakhar Zaman was 49* at lunch.

Four wickets in six balls from Nathan Lyon saw Australia roar back late in the opening session of the second Test in Abu Dhabi, with hosts Pakistan slumping from 57/2 to 57/5 on Tuesday.

Lyon triggered this dramatic collapse with the wicket of Azhar Ali for 15, missed a hat-trick after getting Haris Sohail first ball and then added Asad Shafiq and Babar Azam for ducks as Pakistan careened to 77/5 at lunch.

The debutant Fakhar Zaman was a lucky survivor at the interval, on 49, having been dropped on 30 just moments before Lyon took two wickets in two balls to put Pakistan in a spin and then surviving a manic run-out attempt. Lyon had figures of 7-4-12-4 at the lunch break.

After opting to bat, Pakistan lost Mohammad Hafeez to a blinder of a catch at short leg by Marnus Labuschagne when the batsman whipped a full ball from Mitchell Starc and it lodged in the catcher s thighs before he plucked it once it rolled out. That wicket was followed by a stand of 52 between Zaman and Azhar which was snapped by Lyon in the 20th over.

Pakistan s 50 came up in the 19th over when Zaman steered Jon Holland s left-arm spin past backward point for two. In the same over – Holland s first – Labuschagne dropped Zaman on 30 at midwicket when he dived and failed to take the catch.

In the next over, Lyon held a return catch off Azhar (15) as Pakistan slipped to 57/2. Looking to step out and drive the offspinner, Azhar was beaten in the flight and popped back a simple catch. Off the next ball, Sohail popped a catch to silly point where Travis Head took a superb reflex catch to leave Lyon on a hat-trick.

It was not be, but in his fifth over Lyon had Shafiq inside-edging to short leg where Labuschagne held on and then Azam bowled as he looked to drive his second ball inside-out. Zaman was nearly run out in Lyon s next over, saved as he somehow managed to ground his bat after diving into the crease. He cut Holland for four off the last ball of the morning to get to 49 off 88 deliveries. 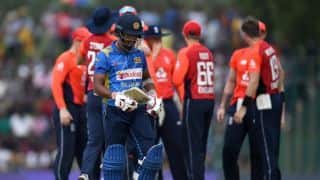