A career-best 5/33 from Mohammad Abbas helped Pakistan bundle out Australia for 145 in the first innings, thus taking a of 137 during the afternoon session of day two of the second Test in Abu Dhabi, which by stumps on day two was extended to 281

A career-best 5/33 from Mohammad Abbas helped Pakistan bundle out Australia for 145 in the first innings, thus taking a of 137 during the afternoon session of day two of the second Test in Abu Dhabi, which by stumps on day two was extended to 281 for the loss of Mohammad Hafeez and Fakhar Zaman.

Zaman, on debut, notched up his second fifty of the match, scoring 66 off 83 balls before he was removed by Nathan Lyon who took a terrific return catch. Azhar Ali then consolidated on the start and reached his 29th Test fifty. At stumps, Ali was unbeaten on 54, with Haris Sohail (17*) for company. Pakistan finished day two at 144/2.

Earlier, Australia surrendered eight wickets for 125 runs in 43.4 overs, with Abbas adding three and the offspinner Bilal Asif also striking three telling blows as the visitors were bowled out for the fourth-lowest first-innings total in Asia.

These strikes put a break on the scoring rate, and the situation turned dire when Yasir Shah had Mitchell Marsh caught at first slip on 13. Asif bowled the 31st over and had Finch caught by a diving Zaman at short leg, one-handed, followed by that of Australia captain Tim Paine who was lbw for 3 as lunch was taken.

Post-lunch, Australia lost Marnus Labuschagne who was run out for 25 while backing up, and then Asif and Abbas finished off the tail with the later claiming his fifth when he trapped Mitchell Starc lbw for 34.

Starc was soon into the thick of things with the ball when he had Hafeez chipping a catch to Head at cover in the fifth over of Pakistan s second innings. A few crackling boundaries to Zaman off Starc and Nathan Lyon in a run-a-ball 32 not out ensured the hosts bossed the session. 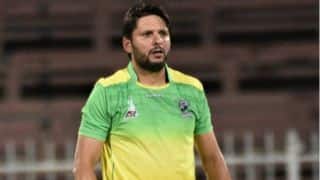