2nd Test, Hyderabad: Spin to the fore as West Indies struggle to lunch

2nd Test, Hyderabad: Spin to the fore as West Indies struggle to lunch

Just when a partnership started to flourish in the closing stages of the morning, West Indies lost Shai Hope in the last over the session.

West Indies face another trial by spin after losing a wicket each to R Ashwin and Kuldeep Yadav in the opening session of the second Test against India in Hyderabad, during which the debutant seamer Shardul Thakur was forced off the field after 10 deliveries.

Just when a partnership started to flourish in the closing stages of the morning, West Indies’ No 3 Shai Hope hopped back in his crease and was given lbw to Umesh Yadav in the over before lunch.

India lost Thakur after he bowled just 10 balls, forced to hobble off the field with an ankle injury. Ashwin completed Thakur s over and went on to bowl 10 overs on the trot, during which his familiarity with the Rajiv Gandhi Stadium was on display.

Kieran Powell s 22 off 30 balls drove an opening stand of 32 in 11 overs until he flashed loosely at Ashwin and picked out the fielder on the circle, the first success of the morning for India and Ashwin’s 500th wicket in first-class cricket. Ashwin sent down seven maidens while tying down Kraigg Brathwaite and Hope with his lines, often getting appreciable bounce to keep the fielders interested.

Brathwaite appeared up for the challenge and bedded in for one of his preferred innings – 68 balls for 14 runs – until he played down the wrong line to Kuldeep and was struck on the back pad by a ball that moved in. Braithwaite reviewed, but unsuccessfully.

Hope, who since his twin hundreds against England at Headingley last year has crossed 50 just thrice in 21 innings, began to flourish near the interval. Umesh’s return before lunch saw him collect some pleasing boundaries – the pick being a flowing drive into the off side – while five overthrows in Ravindra Jadeja’s opening over lifted West Indies’ mood further. But Umesh had the last word, getting Hope struck on the knee roll as he shaped to play the ball across the line. Dubai draw a landmark moment for this Australian side: Stuart MacGill 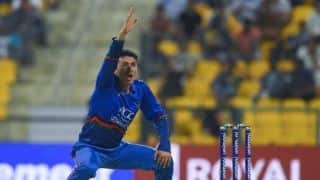