England reached 324 runs for the loss of nine wickets against Sri Lanka, stretching their lead to 278 runs.

Joe Root and Ben Foakes propelled England into a commanding position as the visitors reached 324/9 at the close of the third day s play against Sri Lanka at Pallekele, thus stretching their lead to 278 runs. Rain forced early stumps, but by then Root had struck his 15th Test century to put England into the lead.

England also benefitted from a maiden half-century from opener Rory Burns and Ben Foakes unbeaten 51, but Sri Lanka would be happy to have come back into the game through Akila Dhananjaya, who claimed six wickets after last week having his action called under the scanner.

After England had played put a productive second session, Sri Lanka began the evening by getting Root and Sam Curran off back-to-back deliveries from Dananjaya to give the spinner his third five-wicket haul in Tests. Adil Rashid was unlucky to have been given out lbw with the ball clearly hitting the inside edge of his bat before thudding onto the pads but since there were no reviews left, the legspinner had to go back. Foakes reached his half-century with a six before it started raining.

Sri Lanka s spinners, who had shown promise in the first session, took out two wickets in the second but England continued to score at a healthy rate with Root leading the way. For the second consecutive session, England scored over 100 runs in the first and second sessions.

After Sri Lanka had England on the back foot at 109/4, Root and Jos Buttler attempted to stage a recovery, which they were able to with an important 74-run stand for the fifth wicket, Buttler, similar to his approach in the first innings, did not hold back on his reverse sweeps, But after getting three boundaries, the same shot led to his downfall as Buttler played one on to Akila Dhananjaya.

Moeen Ali cracked a six but he endured another failure after falling leg before wicket to give Dhananjaya his third wicket. At 219/6, England were ahead but needed to strengthen their position even further to ensure a result in their favour. And who better to rise to the occasion than the England captain himself. Root, who had helped himself to three boundaries till lunch, added seven more. Back-to-back boundaries off Malinda Pushpakumara brought up his half-century. Root switched gears and tonked Dhananjaya and Dilruwan Perera for a couple of maximums to enter the 90s, and with a glide past the slips, brought up his century. He was the third English batsman to get out playing the reverse sweep.

Earlier, England managed to head into the lead but lost four wickets to spin in the first session. Burns struck his maiden half-century but fell moments before the interval Sri Lanka s spinners weren t at their best but the pitch still offering plenty of assistance, they did just about enough to seize control.

Having safely played out the one over yesterday, Jack Leach was the first England wicket to fall, out leg before wicket to Dilruwan Perera. At 4/1, Burns and Keaton Jennings staged a nice recovery and added 53 for the second wicket. The confidence of the first Test, where Jennings scored a century and a fifty was visible in his approach as the batsman kept playing the sweep and the reverse to score at a healthy pace.

England didn t look much in trouble at 108 for 2, but two wickets in four deliveries brought Sri Lanka right back into the match. First, Burns, having played so well, was declared out LBW by Pushpakumara, a review not able to save him. Next over, England s experiment to send Ben Stokes up the order failed to click for the second time in the match as the allrounder, trying to sweep Perera was trapped plumb in front for a duck. 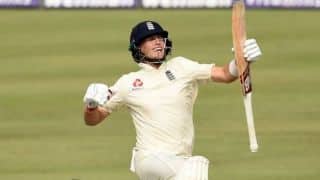