Sunday was Pakistan's ninth T20I win in succession since losing to Australia in July; they have won 17 of 19 games in 2018.

Pakistan batsman Babar Azam became the fastest to 1,000 runs in Twenty20 internationals as the hosts swept New Zealand 3-0 with a massive 47-run win in Dubai on Sunday. A dramatic collapse of eight wickets for 23 runs saw Kane Williamson‘s New Zealand crash to 119 in 16.5 overs chasing 167.

Since Sarfraz Ahmed took over the captaincy in 2016, Pakistan have won 29 of their 33 T20Is. This year, they have won 17 of 19 matches. This 3-0 sweep follows the exact scoreline over Pakistan last month, and Sunday’s win was Pakistan’s ninth successive win in the format.

Top-ranked T20I batsman Azam hit 79 off 57 balls and the in-form Mohammad Hafeez made an unbeaten 53 from 35 to be named Man of the Series. Pakistan’s total of 166/3 proved far from New Zealand’s grasp as the spinners Shadab Khan (3/30) and Imad Wasim (2/28) made life extremely difficult under lights at the Dubai International Stadium.

Williamson’s 38-ball 60 was by far the highest score of the New Zealand innings, followed by Glenn Phillips with 26. The only other player to get to double-digits was Ish Sodhi with 11 not out.

Azam and Hafeez set up the win with a partnership of 94 for the second wicket following Fakhar Zaman’s exit for 11. Hafeez hit two sixes of Sodhi in the 11th over, and in the 15th it was Azam’s turn to do the same to Colin Munro. On 48, Azam reached 1,000 runs in T20Is in just 26 innings, bettering Virat Kohli’s mark of 27 innings. Shoaib Malik weighed in with 19 off nine balls, cracking three boundaries.

The Williamson-Phillips stand was worth 83 for the the third wicket after New Zealand fell to 13/2 inside four overs. Shadab removed both in the 13th over, from where the chase gave way in a hurry. Three wickets made Shadab the leading wicket-taker in T20Is in 2018 with 28 from 19 matches.

“Another brilliant team effort from us. We needed 160-plus, and our batsmen did it,” said Sarfraz. “Throughout the series we’ve taken wickets with the new ball, and we’ve done well with the bat too and created so many records.”

Williamson was left to rue the batting collapse that cost New Zealand the game. “At the halfway stage, on that surface, that was a very good total from Pakistan but we lost our way after being well set,” he said. “It’s a tough pill to swallow, but we’ve got to put that behind us and look ahead to the one-day series.”

The first of three ODIs is in Abu Dhabi on Wednesday. 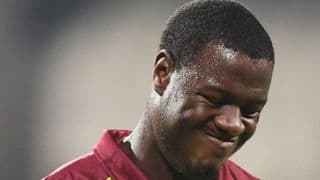 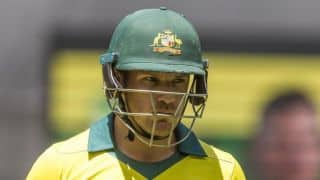