England women defended a modest total of 119 by one run and inflicted a 3-0 whitewash on India in the third T2oI in Guwahati on Saturday.

England women defended a modest total of 119 by one run and inflicted a 3-0 whitewash on India in the third T2oI in Guwahati on Saturday. Skipper Smriti Mandhana seemed to have put India’s chase on track with a strokeful half-century. But her dismissal resulted in another forgettable choke, with India women failing to knock off a modest target of 120. (READ: I would love to be the No 1 spinner in the world Sophie Ecclestone)

With three needed off the final six balls, Kate Cross bowled a magnificent final over, producing four dot balls to the inexperienced Bharati Fulmali. With pressure mounting, Fulmali and Anuja Patil fell in successive deliveries to put Cross on a hat-trick. With three needed off the final ball, Shikha Pandey could only manage a single and Mithali Raj was stranded at the non-striker’s end on 30 off 32. (READ: Wyatt, Brunt lead England to series win over India)

The way Mandhana was batting, it never should have boiled down to the last over. Despite the early dismissal of Harleen Deol in the second over, Mandhana forged a 49-run partnership with Jemimah Rodrigues whose contribution to the alliance was 11. Mandhana’s relentless assault included eight boundaries and one six. Twice the Indian captain struck two fours in an over and smoked a towering six over long-on off Cross. It took her 32 deliveries to bring up her half-century before she played on a delivery from Laura Marsh.

India were still 33 runs shy of a win when Mandhana departed, and with the previous collapses fresh, the skipper’s wicket promised to ring alarm bells in the Indian camp, and the run out of Deepti Sharma seemed to have triggered a fear. With the equation down to 18 off 18, Mithali broke the shackles with two boundaries off Natalie Sciver to put the odds heavily stacked in India’s corner before the last-over thriller unfolded.

That India had to chase down a modest total was primarily due to the efforts of India’s spinners. Patil and Deol snared two wickets each as England women slipped from a comfortable 51 for 0 to 93 for 6 before Sophia Dunkley and Anya Shrubsole provided a late impetus to push the total to 119 for 6.

Considering how openers Danielle Wyatt and Tammy Beaumont started off, England women seemed to be on their way to a threatening total. In seven overs, the openers brought up the 50-run stand. Beaumont and Wyatt had combined to collect four boundaries and two sixes between themselves, and scoring at seven runs an over, the progress seemed to be on track.

It was Patil who put the brakes on scoring and triggered the collapse, which saw England women lost six wickets for 42 runs. Patil removed Wyatt and Beaumont in back-to-back overs and Poonam Yadav sent back Sciver for a duck as the wheels began to come off. Heather Knight scored 11 off 15, and with Amy Jones, tried to lead a steady recovery. But India s spinners, once again on the mark, broke the partnership with Deol beating Knight for flight and having her out stumped to a terrific piece work from Taniya Bhatia.

Jones tried to push the scoring towards the end but was out caught by Shikha Pandey for Deol s second wicket, who had earlier scalped the wicket of Lauren Winfield. At 93 for 6, Dunkley and Shrubsole batted out the remaining 3.2 overs, off which England women added a crucial 25 runs. 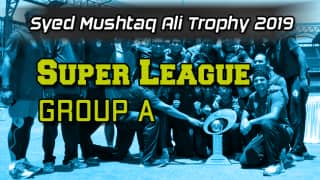