Kohli, who brought up his 18th T20I half century, clobbered four boundaries and two sixes during his 41-ball 61* as India chased down the target with two balls to spare.

Virat Kohli s unbeaten 61 fired to India to a six-wicket win against Australia on Sunday to level the three-match T20 International series 1-1 at the Sydney Cricket Ground.

With the win, India have ensured they remain unbeaten in their T20 engagements since July 2017 when they lost to the West Indies in a one-off game in the Caribbean. India have now won 21 out of their 28 T20Is since then.

Chasing 165 after Krunal Pandya s 4/36 helped keep the hosts to a decent target, India were off to a thunderous start with openers Rohit Sharma and Shikhar Dhawan making mincemeat of the bowling attack. The duo ran amok as India raced away to 67 in 33 balls.

Australia struck in the nick of time with returning pacer Mitchell Starc, playing his first T20I in two years, getting the wicket of Dhawan, who tonked six boundaries and two sixes in his 22-ball 41.

Spin was introduced in the next over with leg-spinner Adam Zampa into the attack. The move worked as Rohit failed to judge the quicker delivery and ended up edging it onto his pad and then the stumps. Rohit followed his partner adding 23 runs from just 16 balls, with one boundary and two hits over the fence.

With two new batsmen at the crease Kohli and KL Rahul Australia managed to slowly creep into the game.

Rahul, who was looking good after smashing a huge six, once again failed to capitalise on the opportunity and departed after lobbing it down to Glenn Maxwell at long-on off Nathan Coulter-Nile. Rahul score 14 but hogged 20 deliveries in the bargain.

Rishabh Pant was out for a duck after he misjudged the slower one off Andrew Tye. A poor shot selection, followed by going to early in his shot, saw Pant edge a slow bouncer behind to keeper Alex Carey.

India were in a spot of bother at 108/4 when Pant departed and hoped they don t fritter away the fine start by the openers.

Kohli too was taking time to settle down. However, once he got his eye in, and received good support from the experienced Dinesh Karthik (22* off 18) at the other end, not even Tye nor Zampa could stop him in the run-chase.

Kohli, who brought up his 19th T20I half century, clobbered four boundaries and two sixes during his 41-ball 61* as India chased down the target with two balls to spare.

Earlier, after winning the toss, openers Aaron Finch and D Arcy Short set up the launchpad with a perfect fifty-run partnership. The duo were helped with some pretty ordinary fielding by the visitors. Australia captain Finch received a lifeline on 22 when he was dropped by Rohit Sharma at long-on.

In his final over, the innings 16th, after being smashed for back-to-back boundaries, Krunal won the battle with Carey (27), who was caught at deep-midwicket after his mistimed sweep shot landed straight into the hands of captain Kohli.

However, with some clean hitting from Marcus Stoinis (25 off 15) and Coulter-Nile (13 off 7), Australia were able to 57 runs from the last five overs to reach 164/6, a decent score, but by no means, a competitive one.

For the series decider, Starc was included in the third T20I in place of the injured Billy Stanlake, while India remained unchanged with Yuzvendra Chahal still finding no place in the side. 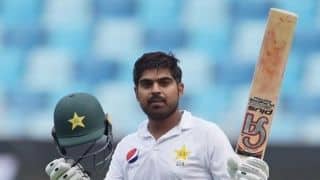 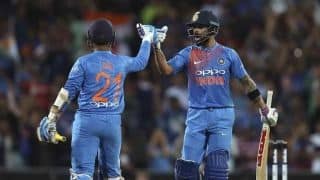