England secured their ninth straight series victory, beating Sri Lanka by eight wickets in the fourth ODI, but not before rain had interrupted play.

England secured their ninth straight series victory, beating Sri Lanka by eight wickets in the fourth ODI in Dambulla, but not before rain had interrupted play and the Duckworth-Lewis-Stern method come into the picture. Sri Lanka were lifted to 273 for 7, their highest total of the series with Dasun Shanaka and Thisara Perera playing important knocks to revive the innings from 102 for 4.

But their efforts were overshadowed by composed knocks from skipper Eoin Morgan and Joe Root, who combined for an unbeaten 56-run stand and took England to the comfort of 132 for 2 in 27 overs, 18 runs ahead on DLS, way ahead of the equation when rain interfered and did not stop. Play was called off after 45 minutes as England took an unassailable 3-0 lead in the series.

At the top Sri Lanka were helped by opener Niroshan Dickwella s 52. After the early dismissal of Sadeera Samarawickrama for 1, Dickwella and skipper Dinesh Chandimal made steady progress to take Sri Lanka to 89/1. But just then they seemed to be building on that partnership, Adil Rashid and Moeen Ali struck to remove the next three wickets for just 13 runs. Both set batsmen departed, followed by the dismissal of Kusal Mendis for another failure to trigger hopes of another batting collapse. Moeen bowled Chandimal through the gate and trapped Dickwella leg before wicket, while Mendis was foxed by Rashid s variations and caught in front.

But from there, Shanaka and Perera staged a strong comeback. Shanaka began by reverse-sweeping Moeen and connecting him for gigantic sixes. Surviving a tough catch on 24 at the boundary from Alex Hales, Shanaka marched on and brought up his fifty off 58 balls with a powerful drive through the covers. He was ably supported by the experienced Perera, who played second fiddle with two fours and a six. Sri Lanka had a fifty-plus partnership of the fifth, sixth and seventh wicket, with Akila Dananjaya scoring an unbeaten 32 off 26.

In response, England started strongly. Lasith Malinga was taken for 12 in the opening over and brought up 52 on the board before Dananjaya struck twice in four overs to get Sri Lanka their much-needed breakthroughs but Moeen and Root produced a fine exhibition of batting against the offspinner and took England past 100 without losing any more wickets.

With the series won by England, Sri Lanka would look to the fifth ODI, a dead rubber, to bag a consolation win. 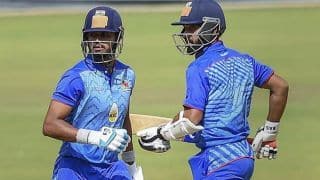 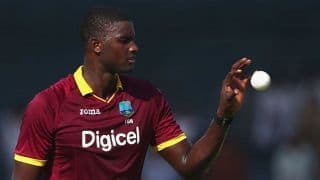