Pujara surpassed Dravid's record of most balls faced in a series of four Tests or less in Australia.

A personal best overseas from Cheteshwar Pujara saw India boss another session at the SCG, while taking them to 389/5 by lunch on day three against Australia. Pujara was once again a picture of composure as he moved himself to 181 by the break, with a third Test double-century looming large.

Pujara extended his partnership with Hanuma Vihari (42) to 101, and then with Rishabh Pant (27*) put on 60 as India continued to march towards a match-winning total.

It was a slow first hour as Pujara and Vihari got used to facing Australia s quicks on a fresh day and refused to chase outside off stump. There were occasional cover-drives, but overall Pujara was content to nudge into the gaps and deflect off his pads to keep the fielders chasing. At the first sight of Mitchell Starc, Pujara pulled out an aerial cut over point for four – the first of the day in the 11th over of the session. (LIVE UPDATES: INDIA vs AUSTRALIA, 4th TEST)

A drive into the covers for four off Nathan Lyon took him to 150 for the seventh time in Tests, and raised the 100 stand with Vihari. In the same over, however, Lyon claimed Vihari when a mistimed sweep took the glove and settled in short leg s palms for the simplest of chances. The batsman reviewed, but Snicko showed a faint spike.

Vihari made 42, adding just three runs to his overnight score in an hour.

When he twirled Starc to fine leg for two, Pujara went past his previous highest score outside of India, the 153 he made in Johannesburg in 2013 and in Galle in 2017. Of the six times he had previously reached 150, thrice Pujara was dismissed before 159 and each time he had crossed that score, a double-century was achieved. Today, he got to 159 with a flowing drive past extra-cover and then bunted a single to mid-off to scamper to 160. (LIVE SCORECARD: INDIA vs AUSTRALIA, 4th TEST)

The proverbial horse had long bolted and a fourth Test double from thereon was a formality. In facing 332 deliveries in this innings, Pujara has surpassed Rahul Dravid’s India record of most balls faced in a series of four Tests or under in Australia. During India s tour of Australia in 2003-4, Dravid faced 1203 deliveries while scoring 619 runs in eight innings for an average of 51.45, with one double-hundred and three fifties.

A 150.6kph yorker from Starc, tailing into leg stump, was excellent pushed past the stumps for four by Pant in what was the left-hander’s best shot of the morning. Australia lost a review when Tim Paine was convinced Pant had nicked Lyon, even when the bowler looked unconvinced. 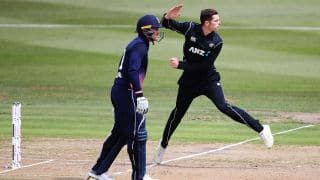