After three unsuccessful and one pending ground inspection, the match was officially called off at 0300PM local time..

NOTTINGHAM: India and New Zealand will pick up one point each after England’s rain caused yet another washout, the fourth of the ICC Cricket World Cup 2019 in which a ball was yet to be bowled. Drizzle continued to play hide and seek throughout the day, and after five unsuccessful ground inspections, the match was officially called off at 3:00pm local time.

The washout means that New Zealand would retain their position at the top of the table with 7 points, while India have jumped a place to be placed third with five points, behind Australia. Contrary to the 90 percent chances of showers expected on Thursday, it rained very little. In fact, there were nothing but drizzled, but the damage incurred to the outfield over the last two days of rain is what seemingly laid the match to rest. ALSO READ: India vs New Zealand, As it happened

The players were content staying inside their dressing rooms, while it were the groundsmen who really had to stretch themselves the extra yard. Each time the covers were taken off, hopes emerged. But just when it seemed that a call would be made, in came the rain again.

More than rain, what really dimmed the chances of the game taking place was the wet outfield. The hover cover and couple of other sheets were used to keep the pitch and the squares protected. But nothing for the remaining portions of the ground. Due to constant rain over the last three days, the ground was far from ready to have a cricket match be played on.

Even though the rain subsided early Thursday morning, the damage caused to the outfield was enough to force a delay. It was a start-stop kind of day in Nottingham, beginning with a light drizzle early morning before stopping. The city remained rain-free for nearly two hours, offering a ray of hope to the teams, audience and groundsmen.

The hover cover came off and it was decided that the umpires will have the first ground inspection around 10:30am local time, the usual time of start of play. But just five minutes before the scheduled inspection, rain returned to delay proceedings further. What put the match in further jeopardy was the expected amount of time the ground required to dry up, with no sun and breeze. With the return of the drizzle, more puddles of water accumulated on the covers.

Once it cleared, the next two inspections took place at 12:30pm and 1:30pm, each time a slight drizzle either side of the inspection time, hampering proceedings. There were discussions of a possible 30-over-a-side contest taking place since the forecast for the second-half of the day looked promising. Or even a possible truncated T20 game, the latest cut off for which is 5:00pm.

But yet another spell of drizzle around 1:30pm apparently inflicted more damage. The last and final inspection took place at 3:00pm and the umpires called it off. Despite numerous Indian fans flocking the stadium, Trent Bridge remained a lot emptier than usual. Expecting a damp squib, many people were spotted leaving the ground during the time of third inspection, around 12:30pm.

New Zealand now have a six-day gap before they face South Africa on June 19 at Edgbaston, whereas India move on from here to meet Pakistan in Manchester on Sunday. 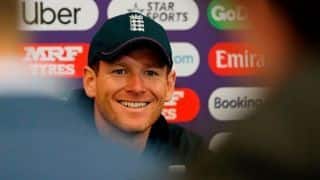