Five wickets to Qais Ahmad put Balkh Legends on track to be crowned champions of the inaugural Afghanistan Premier League (APL) T20, as they beat Kabul Zwanan by four wickets at the Sharjah Cricket Stadium.

Ahmed’s 5/18 from four overs played a huge role in restricting Kabul to 132/9 in their 20 overs, which was overhauled in 18.1 overs by Legends with Chris Gayle hitting 56 off 34 balls and Ravi Bopara an unbeaten 32 off 29 to finish the match and get Legends the trophy.

Kabul’s innings, after Rashid Khan opted to bat, was a middling affair. Luke Ronchi and Hazratullah Zazai fell inside five overs and after a positive stand, the South African pair ofColin Ingram and Wayne Parnell fell in quick succession to leave Kabul 65/4 in the 11th over. Ahmad began with the wicket of Parnell for 21 off 25 balls and then ransacked the middle order, with Laurie Evans, Javed Ahmadi and Rashid Khan falling to his spin as the innings gave way. Ahmad added Muslim Musa to complete his five-wicket haul.

T20 Master Blaster is in the house. Hold on to your seats. #APLT20 pic.twitter.com/TPhlgfLlzu

Chasing 133, Legends lost Colin Munro and Darwish Rasooli in the first over bowled by Parnell but Gayle brought his vault of experience to the game. After a sedate Powerplay that yielded just 30 runs, and saw Rashid drop Gayle at long-on, Legends lost Ryan ten Doeschate for 12 when he nicked Musa. Legends were 37/3 in seven overs.

Here, Gayle opened up and sped to his fifty in 32 balls. Bopara was a watchful spectator in a stand worth 50, of which he made 7. Rashid had Gayle caught at long-off for 56, but the chase was on its way to an end and Bopara ensured it was completed. The winning runs came from Gulbadin Naib who hit a six over long-on. 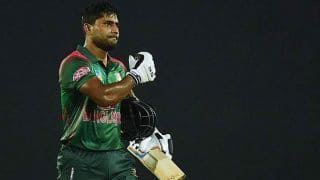 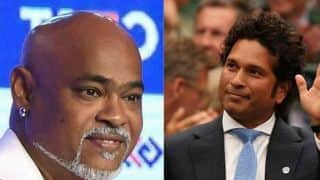