Rashid s unbeaten 27 from just eight balls featured two fours and three sixes and got Kabul over the line with five balls to spare.

Kabul Zwanan bounced back from a loss in their last game to beat Kandahar Knights by four wickets in the Afghanistan Premier League on Tuesday, chasing 153 thanks to a steadying hand from Laurie Evans and a ballistic cameo down the order from skipper Rashid Khan.

Rashid s unbeaten 27 from just eight balls featured two fours and three sixes and got Kabul over the line with five balls to spare. Evans was 32 not out off 31 balls, having entered the chase at 82/4 after Luke Ronchi s 14-ball 31 put 50 on the board inside four overs.

Never say never! And when Rashid s at crease, he will make any challenge look like a cakewalk. #APLT20 @ACBofficials pic.twitter.com/jcJHSmUfUe

On a Sharjah pitch not conducive to free-stroking batting, only Kandahar captain Asghar Afghan, Ronchi and Rashid got going. Afghan s 31-ball 60 was the highest score of the first innings – he raised his fifty off just 22 balls – and helped Kandahar get to 76/2 in the ninth over. A superb four overs from Rashid (1/14) and Shahidullah Kamal s economical spell of 4-0-25-0helped put the breaks on the innings, while Nasir Jamal (28 off 28) and Najibullah Zadran (25 off 26) were not able to tee off. Kandahar finished on 152/5 in 20 overs.

Ronchi got the chase off to a flier, taking Karim Sadiq for 20 runs in one over. He was out to Sayed Shirzad the fifth over, by which stage Kabul had sped past the 50-mark. Shirzad added Hazratullah Zazai in the same over, and then Karim Janat claimed 3/14 in four overs to get Colin Ingram, Younas Ahmadzai and Kamal as the chase stumbled to 120/6 in 17.1 overs.

Evans struggled to get going but his ability to hang around proved instrumental for Kabul, who had Rashid to thank for his robust innings. Rashid carved his first ball for four and then targeted Sayed Shirzad and clubbed him for three sixes in a row during the 19th over. 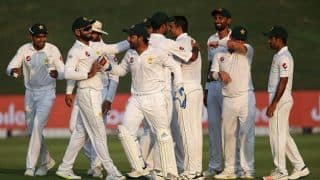