Six sixes in an over put Hazratullah Zazai level with Chris Gayle and Yuvraj Singh, but his innings came in a lost cause.

Hazratullah Zazai drew level with the all-time Twenty20 record in hitting a 12-ball half-century, including six sixes in one over, but his stunning innings ended up on the losing side as Balkh Legends beat Kabul Zwanan by 21 runs in the Afghanistan Premier League at the Sharjah Cricket Stadium.

In front of the man whose record he drew level with, Chris Gayle, the Afghanistan batsman smacked the left-arm spinner Abdullah Mazari for 37 runs in one over with a wide added to six sixes. Getting to a fifty in 12 balls put him level with Gayle, who smacked 80 earlier in the day to set up Legends’ win, and Yuvraj Singh.

Hazratullah Zazai hit six sixes in an over on his way to a fifty in just 12 balls. pic.twitter.com/NUZZM7kUzu

After the match, Gayle posed for a picture with him. I want to keep enjoying my cricket always and will keep striving towards improving my cricket further. It was a surreal moment for me to perform in front of my idol (Chris Gayle). I was just trying to play my natural game and did not in any way think of outshining anyone, Hazratullah said.

Zazai, 20, was eventually out for a 17-ball 62 as Kabul Zwanan fell 21 runs short of a target of 245. His record-equalling innings came just five days after he scored 124 against Nangarhar Leopards in the same competition. 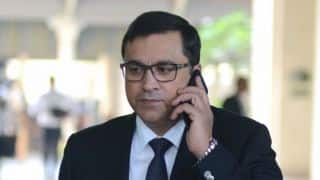