After a lengthy rain delay forced the only T20I match between Australia and South Africa to be reduced to 10-over-a-side match, South Africa beat Australia by 21 runs at Carrara Oval, Carrara on Saturday to finish the tour with and ODI series and a T20I win.

Chasing a tall order of 109 to win, Australia never got going with skipper Aaron Finch falling in the second over to Lungi Ngidi, followed by the wicket of other opener D Arcy Short for a first-ball duck to Chris Morris.

South Africa bowlers were superb in their execution and were rewarded with regular wickets. Big hitting Chris Lynn was yorked by Morris as the South African, playing his first match of the tour finished with an impressive 2-0-12-2. Only Glenn Maxwell managed a substantial score with a 23-ball 38-run knock, getting out in the last ball of the match.

Earlier, openers Quinton de Kock and Reeza Hendricks helped South Africa to 42 runs in under three overs before Hendricks was sent back by Nathan-Coulter-Nile. skipper Faf du Plessis played a handy knock of 27 off 15 balls before he was magnificently caught at the long-on ropes by Maxwell in the 7th over.

De Kock departed in the sixth after scoring 22 off 16 to Maxwell. Wickets dented SA s progress with Heinrich Klassen falling to Coulter-Nile for 12 followed by the wickets of David Miller ( 11 off 10) and Morris (0) as Australia pulled things back in the later part of the SA innings. 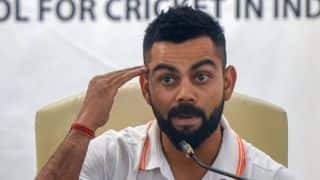