Sri Lanka were huge trouble at the dinner break on the opening day in Brisbane.

Newcomer Jhye Richardson took three wickets as Australia had Sri Lanka in huge trouble at 122/8 at the dinner break on the opening day of their day-night Test in Brisbane on Thursday.

The 22-year-old West Australian bowled with real pace and found just enough movement to trouble the Sri Lankans, who struggled to come to terms with the bouncy Gabba wicket despite winning the toss and choosing to bat. (FULL SCORECARD: AUSTRALIA vs SRI LANKA, 1st TEST)

Richardson, who only came into the side after Josh Hazlewood was ruled out with injury, had figures of 3/26 to lead an impressive Australian display with the ball.

The only Sri Lankan batsman to show any resistance was wicketkeeper Niroshan Dickwella, who was not out 42 at the break after a combination of resolute defence with some audacious attacking shots.

Sri Lankan captain Dinesh Chandimal had elected to bat first on a hot and humid Brisbane afternoon but the visitors were forced to battle hard against the Australian attack. The Sri Lankans moved the score along to 26 before Lahiru Thirimanne on 12 tried to drive Pat Cummins, only to edge a comfortable catch to Marnus Labuschagne at third slip.

Richardson was impressive in his first spell in Test cricket, hitting the pads of the Sri Lankan openers numerous times. He was finally rewarded with the wicket of Chandimal, well caught by a diving Joe Burns at second slip to leave the visitors at 31/2. (ALSO READ: Sri Lanka 58/3 at tea in day-night debut)

Mendis replaced his skipper at the crease and he and Dimuth Karunaratne fought hard to try and rebuild the visitors’ innings. They inched the score along, taking 100 minutes to reach the 50 mark. But with the score on 54, Lyon drew an edge from Karunaratne, on 24, and wicketkeeper Tim Paine took a sharp catch, high and to his left to put the home side in charge at the first break.

Mendis had looked good before the break but he was undone by a superb Richardson delivery three balls after the resumption, which squared him up and crashed into the stumps. Dhananjaya de Silva gave Richardson his third wicket when he nibbled at a ball that moved slightly away from him and got a fine edge to Paine, having made just five.

Cummins then had Silva caught behind for nine to leave the Sri Lankans reeling at 91/6.

They were in further disarray two runs later when a Cummins short ball crashed into Dilruwan Perera’s thumb, forcing the off-spinning all-rounder to retire hurt.

Mitchell Starc took his 200th Test wicket when Labuschagne held a sharp catch at third slip to dismiss Suranga Lakmal for seven, then had his 201st soon after when Perera, who had returned to the crease, got a thick edge to give Labuschagne his third catch. 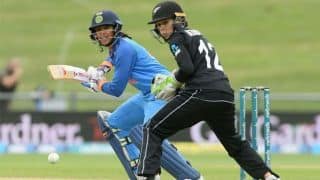 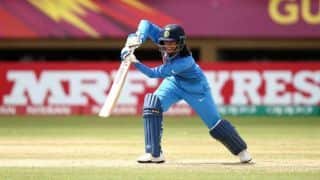