Cummins, Richardson and Lyon each claimed a wicket to give Australia the upper hand.

Sri Lanka lost three wickets in the first session of their maiden day-night Test match at the Gabba on Thursday to head into the tea interval on 58/3. Dinesh Chandimal’s decision to bat first against the pink ball did not go to plan, with the top three all dismissed in 22 overs to give Australia the upper hand by the first break in play.

Sri Lanka’s openers did well to see off the opening ten overs from Mitchell Starc and the debutant Jhye Richardson, only to fall in successive overs. Lahiru Thirimanne, on 21, poked Pat Cummins to third slip where Marnus Labuschagne held a sharp catch, and in the next over Chandimal (5) became Richardson’s first Test wicket when he was forced to edge to the recalled Joe Burns at second slip. (FULL SCORECARD: AUSTRALIA vs SRI LANKA, 1st TEST)

Sri Lanka had slipped to 31/2. Thirimanne had earlier successfully reviewed an lbw verdict to deny Starc his 200th Test wicket.

Karunaratne played out the quicks well, defending resolutely and driving handsomely when the ball was in his zone. On 24, he fell to the very accurate Nathan Lyon who got a bit of bounce for Tim Paine to hold the faint edge very well.

Sri Lanka have never won a Test in Australia but are the holders of the Warne-Muralitharan Trophy after their 3-0 sweep at home in 2016. 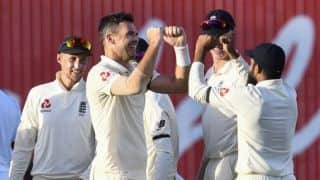 "Cricket has been part of my life for 19 years," Johan Botha pens open letter following retirement