Joe Burns and Travis Head led a fightback after Australia lost three quick wickets against a second-string Sri Lankan attack in the first-ever Test played in Canberra on Friday.

Australian skipper Tim Paine won the toss at the Manuka Oval and put his side in on a flat track conducive to batting, with his team looking to record their first century of the summer. By lunch, they had struggled to 103/3 with Burns not out 46 and Head on 39 in a face-saving 75-run stand.

It was a dire start by Australia against a seriously depleted Sri Lankan attack and against a team they had beaten by an innings and 40 runs in the first Test at Brisbane. (LIVE SCORECARD: AUSTRALIA vs SRI LANKA, 2nd TEST)

Pace duo Lahiru Kumara and Dushmantha Chameera picked up injuries in that rout and have returned to Sri Lanka, with the inexperienced Kasun Rajitha and Vishwa Fernando taking their place. And in a big blow, Suranga Lakmal, their best bowler in Brisbane, was ruled out on the morning of the Test with a stiff back, with debutant Chamika Karunaratne brought in as his replacement.

The three newcomers have a combined five Tests of experience between them, but they rose to the challenge.

Marcus Harris fell for 11 in the fourth over with a poorly executed square drive off left-armer Fernando caught at point by Chamika Karunaratne. The out-of-form Usman Khawaja soon followed, lasting just three balls before offering a lazy jab at an out-swinger from Fernando. He was caught at slip by Kusal Mendis for nought, leaving Australia on 15/2. (READ MORE: Allan Border tips Travis Head, Marnus Labuschagne for Test success)

The gloom continued when Chamika Karunaratne struck with his fourth ball in Test cricket, removing Marnus Labuschagne with an excellent angled delivery for six, caught behind off a thick edge by Niroshan Dickwella.

At the other end, opener Burns could only look on and dig in, biding his time and playing the loose balls as he worked to try and build a big score that will put him in contention for the Ashes tour of England later this year. He survived a dropped catch on 34 by Dhananjaya de Silva at slip, but was otherwise solid.

Head, who hit 84 in Brisbane, also looked in good touch as he stroked five boundaries in his patient innings. 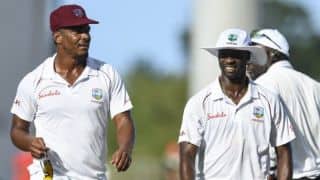