Kusal Mendis was on 14 at the break alongside Roshan Mendis, who was yet to score.

Australia had the upper hand at tea on the opening day of the day-night Test at the Gabba as Sri Lanka crawled to 58/3 at the first break.

After Sri Lankan captain Dinesh Chandimal won the toss and elected to bat on a hot and humid Brisbane afternoon, the visitors were forced to battle hard against the Australian attack. Kusal Mendis was on 14 at the break alongside Roshan Mendis, who was yet to score. (FULL SCORECARD: AUSTRALIA vs SRI LANKA, 1st TEST)

Sri Lanka’s openers had weathered the early storm from the Australian pace attack, although Lahiru Thirimanne, playing his first Test since 2017, looked uncomfortable at times.

At 17 for no wicket, umpire Richard Illingworth adjudged him lbw to Mitchell Starc, but the Sri Lankans reviewed the decision and ball-tracking showed the delivery missing leg stump, denying Starc his 200th Test wicket.

The Sri Lankans moved the score along before Thirimanne on 12 tried to drive Pat Cummins, only to edge a comfortable catch to Marnus Labuschagne at third slip.

Debutant Jhye Richardson opened the bowling with Starc and was impressive in his first spell in Test cricket, hitting the pads of the Sri Lankan openers numerous times. He was finally rewarded with the wicket of Chandimal, well caught by a diving Joe Burns at second slip to leave the visitors at 31/2.

Mendis replaced his skipper at the crease and he and Dimuth Karunaratne fought hard to try and rebuild the visitors’ innings. Mendis survived a torrid examination from Cummins, taking 12 balls to get off the mark, while Karunaratne also struggled with the turn and bounce of off-spinner Nathan Lyon, who was brought into the attack to replace Richardson.

They inched the score along, taking 100 minutes to reach the 50 mark. But with the score on 54, Lyon drew an edge from Karunaratne and wicketkeeper Tim Paine took a sharp catch, high and to his left to put the home side on top at the break. “Cricket has been part of my life for 19 years,” Johan Botha pens open letter following retirement 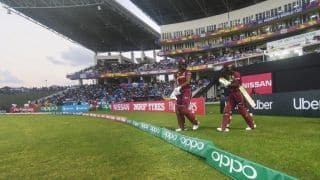