A stunning spell of pace bowling from Pat Cummins left Sri Lanka reeling at 74 for five at tea on the third day of the first Test in Brisbane on Saturday.

A stunning spell of pace bowling from Pat Cummins left Sri Lanka reeling at 74 for five at tea on the third day of the first Test against Australia in Brisbane on Saturday.

Cummins, who dismissed Dimuth Karunaratne on the last ball of the day on Friday, took the first three Sri Lankan wickets to fall in Saturday’s opening session.

Lahiru Thirimanne, playing his first Test since 2017, was not out 31 at the break with Niroshan Dickwella on three.

He snared Dinesh Chandimal with the second ball of his first over, the Sri Lankan captain edging a ball that leapt off a good length to Kurtis Patterson in the gully.

Kusal Mendis (1) replaced his skipper at the crease but lasted just seven balls before he launched an ambitious drive off Cummins, only to edge the ball to Joe Burns at second slip.

The Sri Lankans were reeling at 18 for three but Roshan Silva dug in with Thirimanne.

The pair took the score to 35 before Silva lost concentration and fell in identical fashion to Mendis, driving at Cummins and edging the ball to Burns, who took a good low catch.

Thirimanne looked solid throughout the session, although he had a huge scare on 16 when he was adjudged lbw to off-spinner Nathan Lyon, only to be given a reprieve when he reviewed the decision and Hawkeye showed the ball would have gone over the stumps.

He and Silva were far more comfortable against the other Australian bowlers and once Cummins was replaced by a wayward Mitchell Starc, the pressure eased.

But in the second last over before the tea break, Jhye Richardson got a ball to crash through de Silva’s defences and take out the off stump. 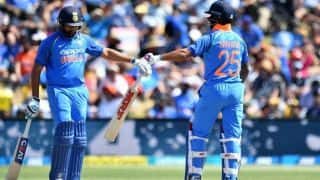 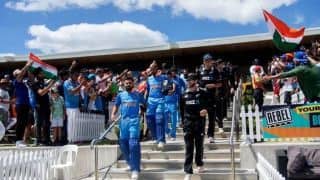 ‘May our hearts continue to beat for Bharat’ – Sehwag, Tendulkar lead Republic Day wishes on Twitter