Set a target of 98, Australia were taken home with 58 balls remaining thanks largely to Alyssa Healy s 67 not out from 51 balls.

The Australian women s cricket team has underlined its tag as the No 1 team in women s T20Is by completing a 3-9 sweep of Pakistan women in Kuala Lumpur on Monday, a dominant showing ahead of next month s ICC World T20 in the Caribbean.

Led by Rachel Haynes in the absence of Meg Lanning, who was ruled of the match with a minor lower back injury, Australia beat Pakistan by nine wickets at Kinrara Academy Oval. Set a target of 98 after Amy Schutt s 2/15 helped restrict the opposition to 97/8, Australia were taken home with 58 balls remaining thanks largely to Alyssa Healy s 67 not out from 51 balls.

Healy put on 60 for the opening wicket with Beth Mooney and sped to her second fifty of the series – and third in the last five T20Is – from 34 balls. She hit 10 fours and two sixes to finish the chase.

Also contributing for the Southern Stars were Delissa Kimmense (1/12 in four overs) and Ashleigh Gardener (0/8 from three) as Pakistan were restricted during their innings. Healy nailed a direct hitting the third over to run out Javeria Khan before a 49-run partnership between Bismah Maroof and Aliya Riaz was snapped with Sophie Molineux effected a run-out. 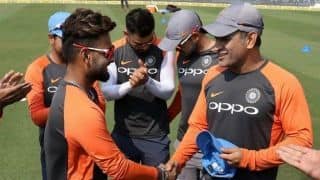