Bangladesh debutant Shadman Islam displayed glimpses of his talent with a steady 36 not out in 116 balls, helping Bangladesh to 87/2 at lunch

Bangladesh debutant Shadman Islam displayed glimpses of his talent with a steady 36 not out in 116 balls, helping Bangladesh to 87/2 at lunch on the opening day of the 2nd Test Bangladesh vs West Indies Test match at the Shere Bangla National Stadium, Mirpur, Dhaka.

Opting to bat first, Shadman, playing in place of injured Imrul Kayes, cracked his third ball in Tests for a boundary with a sumptuous straight drive off Kemar Roach to begin the proceedings.

With the pitch offering little for the pacers – Bangladesh dropped Mustafizur Rahman to add Liton Das as wicketkeeper to go with an all spin attack – spin was introduced as early as the fourth over by West Indian captain Kraigg Brathwaite. Chase got considerable returns from the day one pitch and soon enough he was bowling in tandem with left arm spinner Jomel Warrican.

However, Shadman and fellow opener Soumya Sarkar had little trouble negotiating the spin taking their team to 42 in the 16th over, until Chase got one to toss up and Sarkar lost his concentration, driving it on the up only to take the edge to the lone slip. He departed for 19.

In walked in-form Mominul Haque and in company of Shadman he took the team s total past the 50-run mark and looked in good nick during his 46-ball stay, that came to an end in the last over before lunch.

Roach was the wicket-taker when Haque tried to pull a length ball only to lob it to mid-on. He departed for 29. 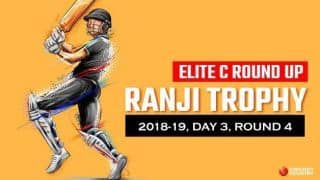 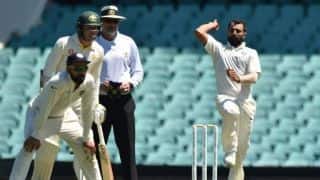