The offspinner took of nine his 12 wickets on day three as West Indies folded for 111 and 213.

Bangladesh have crushed West Indies by an innings and 184 runs at Mirpur on Sunday to claim the second Test and with it the series 2-0, their biggest ever victory and first home series win over their opponents. Bangladesh’s previous biggest margin of victory in a Test was 226 runs, when they beat Zimbabwe in 2005 for their maiden victory.

West Indies were bowled out for 111 in the morning session, with Mehidy claiming 7/58 to enforce the follow-on. They then lost four wickets inside 13 overs to go into the lunch break in a daze, and Bangladesh wrapped up the win before tea with Mehidy claiming five to finish with a career-best 12/117 for the Test – the best figures by a Bangladesh bowler. Of these, 15 fell on day three.

The follow-on enforced, West Indies woes against spin continued. Kragg Braithwate was lbw when struck flush on the back pad by Shakib, Kieran Powell was once again stumped when nowhere to the pitch of a flighted delivery from Mehidy and Taijul Islam picked up Sunil Ambris and Roston Chase for his first wickets of the game.

Post lunch, Hetmyer swung his bat for nine sixes and got as far as 93 off 92 balls before he miscued another big shot and became Mehidy’s fourth wicket of the innings. The offspinner’s fifth came when he accepted an easy return catch from Jomel Warrican.

Bangladesh were delayed by a tenth-wicket stand of 42 by Roach (37*) and Lewis (20). Taijul finished the match with the wicket of Lewis. 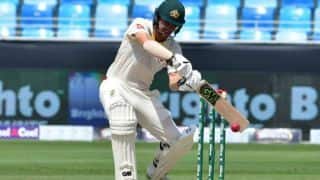 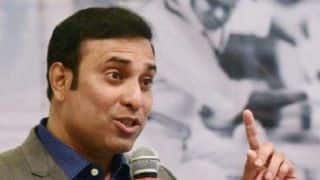