Devendra Bishoo finished with 4/26 as the home team threw away their last three wickets for three runs to be bowled out for 125.

West Indies claimed the last five Bangladesh wickets before lunch on day three in Chittagong to set themselves a target of 204. Devendra Bishoo finished with 4/26 as the home team threw away their last three wickets for three runs to be bowled out for 125.

Shannon Gabriel bowled Mushfiqur Rahim for 19 with a ball that jagged in and kept low, leaving Bangladesh 69/6. An under-100 total was averted by Mahmudullah (31) and Mehidy Hasan Miraz, whose 18 helped injected vital runs to Bangladesh s total until he was foxed by a lovely legbreak from Bishoo.

Teenage debutant Nayeem Hasan, who on Friday became the youngest player ever to claim five wickets in an innings on Test debut, made 5 before he was dismissed by Bishoo. Dropped on 15 by Shai Hope at slip off Bishoo, Mahmudullah ventured down to hit Bishoo for six and consistently worked the ball off his pads to ensure he wasn t bogged down. But one adventurous shot too many ended his innings on 31, when a mistimed paddle scoop settled in Hope s hands at slip.

A sloppy drop by West Indies captain Kraigg Brathwaite did not cost the team, for Roston Chase had the No 10 Taijul Islam caught at long-on moments later. 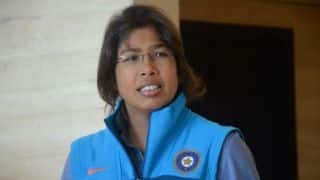 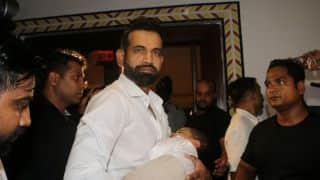