The win helps Renegades jump to the second position with 8 points.

A complete all-round performance from Melbourne Renegades paved way for their fourth win of the 2018-19 Big Bash League as they notched up a breezy eight-wicket win against Brisbane Heat. Left-arm fast bowler Usman Shinwari picked up 3 for 16 and legspinner Cameron Boyce stifled the scoring rate, eventually giving Heat 144 for 8.

But Renegades showed no stutter in their chase the overhauled the target in the 16th over with Sam Harper scoring an unbeaten 56. The Heat had themselves to blame as they kept losing wickets consistently and had it not been for Brendon McCullum s half-century, the total would have made for a poor reading. McCullum s knock was far from being fluent or the quickest. Max Bryant, Chris Lynn and Matthew Renshaw endured low scores, leaving McCullum the responsibility of playing through the innings.

Facing 47 balls, McCullum scored three fours and a six before Cameron Joyce cleaned him up. He had already removed Lynn earlier and bowled four economical overs giving away 17 runs. Shinwari, who had given the Heat a breakthrough early in the innings my dismissing Bryant, came back to remove JJ Pierson and Joe Burns. Ben Cutting scored 20 off 10 with two fours and a six but even his cameo wasn t enough to get the Heat past the 150-run barrier.

Mackenzie Harvey was the first wicket to fall during Renegades chase, falling to Brendon Doggett after he and Marcus Harris had offered them a rapid start putting on 37 in 21 balls during which the left-hander took a liking to Pattinson. 19 off Harris 28 came off one Pattinson over setting the chase ablaze.

But their dismissal, within a span of one run brought the Heat back in the game. With the asking rate in control, Harper and Tom Cooper batted sensibly to cause no further casualty as the two put on an unbeaten 107-runs stand. The fact that the Heat dropped Cooper twice made the going easy for the batsman. And while Cooper was a lot restrained in his approach, Harper did not hold back and struck seven boundaries and a six en route to his half-century and helping the Renegades jump to the second position with 8 points. 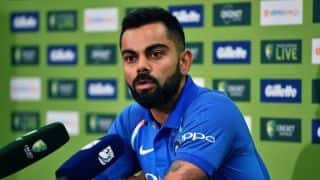 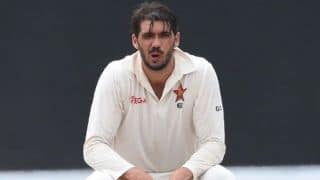