Daniel and Hughes' century-plus stand guided Sixers to a competitive 164/4, after which O'Keefe and Abbott picked up three wickets each.

Half-centuries from Daniel Hughes and Jordan Silk, aided by disciplined spells of bowling from Steve O’Keefe and Sean Abbott formed the backbone of Sydney Sixers 17-run win over Perth Scorchers. In the fourth game of the 2018-19 Big Bash League at the Sydney Cricket Ground on Saturday, Daniel and Hughes’ century-plus stand guided Sixers to a competitive 164/4, after which O’Keefe and Abbott picked up three wickets each to restrict the Scorchers to 147/8.

Winning the toss and batting first, the Sixers lost their openers Jack Edwards and Joe Denly, and No. 3 batsman Moises Henriques inside the Powerplay and were reduced to 30 for 3 in the fifth over. Steadying the ship were Hughes and Silk, who stitched a match-winning 124-run partnership for the fourth wicket and batted almost till the end of the innings to provide the Sixers lift.

Jason Behrendorff and Jhye Richardson produced tight spells to share the top three wickets between themselves, but once they were out of the attack, Hughes and Silk took over. They brought up the 100 in the 14th over before stepping on the gas. 54 runs came off the next 31 deliveries and both batsmen took charge with seven boundaries and three sixes, en route to their respective half-centuries. Andrey Tye conceded 35 off three before getting the wicket of Hughes in the final over.

Chasing the target, the Scorchers were off to a terrible start, losing their top three batsmen with just nine on the board. Left-arm spinner O’Keefe had wicketkeeper batsman Sam Whiteman stumped off the first ball of the innings and in the next over dismissed David Willey for an 11-ball 4. When he trapped Michael Klinger leg before wicket for three, the Scorchers seemed to be folding inside 100 before skipper Ashton Turner and Hilton Cartwright attempted to rebuild the innings.

They did so with a 99-run stand, during which Cartwright reached his fifty having struck four boundaries and a six. But the pressure of a steep asking rate was too much for the Scorchers to overcome and Sean Abbott picked the first of his three wickets removing skipper Turner one short of a half-century. Abbott sent back William Bosisto and Nathan Coulter-Nile and once Cartwright was run out it was all but over for the Scorchers. 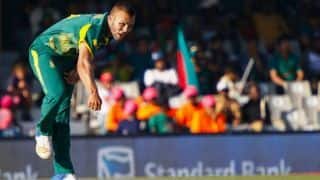