Table-toppers Hobart Hurricanes have been eliminated from the 2019 Big Bash League (BBL) by Melbourne Stars who chased a target of 154 with six wickets and seven deliveries remaining in Thursday’s semi-final in Hobart.

Daniel Worrall led the way for the Stars with 4/23 from his four overs – his best figures in T20s – as Hurricanes were kept to 153/7, and despite a slew of wickets inside 11 overs of their chase, Stars kept ahead of the asking rate and won in the 19th over.

The teenaged Afganistan spin sensation Qais Ahmad pegged back their chase with three wickets in three overs, but Glenn Maxwell and Seb Gotch kept their cool to deny Hurricanes. Maxwell (43* off 33 balls) and Gotch (33* off 22) put on 72 in 8.1 overs.

This is Stars’ first win over Hurricanes this BBL season, after two losses, and snapped the form team’s six-match unbeaten run at Bellerive Oval.

Stars will now meet the winner of Friday’s second BBL semi-final between Melbourne Renegades and Sydney Sixers on Sunday.

For Hurricanes, Ben McDermott‘s 42-ball 53 proved the only fifty of the match after Maxwell opted to bowl. Worrall struck twice in his first over and twice at the back end of Hurricanes’ innings. Up front, he had the in-form Matthew Wade out for 2 with his second delivery and ended the over by bowling Caleb Jewell to have Hurricanes 5/2. D’Arcy Short, the BBL’s leading run-getter, cracked his way to 35 off from 21 balls, hitting four fours and a couple of sixes before he was third out which left the innings at 42/3 at the end of the Powerplay. (READ MORE: Hurricanes can shut down Stars in BBL semi-final: Short)

With George Bailey (37 off 32), McDermott put on 75 for the fourth wicket even as eight overs passed without a boundary hit. Two sixes off Adam Zampa – who earlier had Short caught at long-on – from Bailey signalled a shift of gears, but the former Australia skipper fell attempting a third six off Worrall. Hurricanes lost three wickets in the last three overs, including McDermott to Dwayne Bravo in the 18th.

Chasing 154 to enter the BBL final, Stars failed to manage big partnerships but despite a poor start they managed to keep the asking rate in reach. Joffra Archer struck first ball to get Ben Dunk caught behind for nine from three deliveries, and next to go was Marcus Stoinis for 18 off 20 balls when he was bowled in Ahmad’s opening over. The Afghanistan legspinner struck in his second over, getting Nic Maddinson out for 18 off nine balls when a reverse-sweep was top-edged to point. Maddinson had mistimed the identical shot the ball before and got six for his effort, but fell the second time.

His dismissal left Stars at 78/3 after nine overs, needing seven per over. In his third over, Ahmad won an lbw shout for his best figures when Peter Handscomb (35 off 26) missed a big swipe. Handscomb’s was a vital innings, given the situation.

Gotch took Ahmad for two fours in his fourth over to send him off with 3/33, but a tidy three-over second spell from Riley Meredith which produced 20 runs kept Hurricanes in the mix. With six overs left, Stars’ asking rate was 7.33 and even though they were ahead at 7.85, they needed boundaries.

Maxwell struck two in the span of three balls – one each off Archer and James Faulkner – and when he cracked four off the last ball of the 17th over, the game was as good as done. The remaining 16 runs were achieved in a flurry, with Gotcha lofting Faulkner for four and six in successive deliveries. 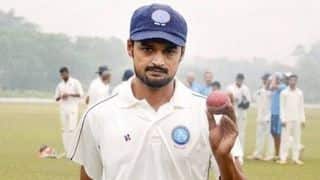