Josh Lalor took a hat-trick before a quickfire fifty from captain Chris Lynn guided Brisbane Heat to a comfortable six-wicket win against Perth Scorchers in a Big Bash League clash on Friday.

After restricting Scorchers to 128, Lynn top-scored from either side with an unbeaten 56 off 39 with three fours and four sixes to overhaul the target with more than two overs to spare as Heat finished on 130/4.

The win, though, was setup by the Heat bowlers as Mujeeb-ur-Rahman and Lalor took three wickets each to keep Scorchers batsmen on the backfoot.

Scorchers innings was off to a bad start after they lost three wickets inside four overs two of them falling to Mujeeb. Shaun Marsh (9) and Ashton Turner (2) both holed out off Mujeeb while Josh Inglis became Matthew Kuhnemann’s first victim of the innings.

Regular blows meant there was no partnership and consequently no platform to build on. By 13th over, half of Scorchers batsmen were back in the dug-out.

Nic Hobson (43) and Clint Hinchliffe (9) built the first and only significant partnership of the innings when they added 39 runs for the sixth wicket. The stand was dominated by Hobson who also finished as the top-scorer of the innings. Cameron Bancroft’s 32 off 24 with four fours was the next best.

Lalor’s hat-trick was spread across two overs. The seamer was seemingly unaware of the impending record and only realised after completing it. He first removed Andrew Tye off the final delivery of 18th over before adding the scalps of Matthew Kelly (2) and Hobson to become the fourth bowler in BBL history to do so.

In reply, Heat lost Ben Cutting (12) cheaply but Lynn and Max Bryant (26) ensured the chase remained on track. Matthew Kelly did remove Brendon McCullum (3) cheaply and added another wicket to his tally removing Matt Renshaw (15 off 13) but by then the contest was as good as over.

Theoretically, with this win, Heat have kept their chances of making the semi-finals alive provided they win the remaining two matches and other results go in their favour. On the other hand, Scorchers are in real danger of finishing at the bottom of the pile. 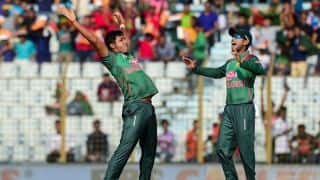 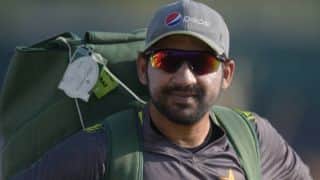